ForexLive Asia FX news wrap: UK to head back into lockdown this week

GBP opened lower early here in Asia with weekend news that UK PM Boris Johnson had relented and ordered a nationwide lock down. You'll recall that for months Johnson was adamant he would not do so. Johnson cited the mounting new daily case count and said the new restrictions, to be in place until December 2 would help stop health services from getting overwhelmed. The move in the UK follows similar nationwide measure announced in France and Germany last week.

There are more details on the new UK measures in the bullets above.

GBP had a minor retracement move in the hours that followed, not the entire drop though and as I update the moves have run out of what little impetus they had and it sits circa 1.2930.

While on the UK we had some positive inlklings out of Brexit trade talks - these are set to continue this week with some progress being reported on the fishing issue but its not all smooth sailing with points of difference remaining elsewhere also.

When US Sunday evening futures opened oil gapped lower, demand destruction concerns on these accelerating lockdowns around the globe (excluding Asia where the pandemic is largely controlled to small numbers only). The lower oil price bled over into a weaker CAD, USD/CAD gained towards 1.3370 before giving a portion of its upmove back.

US equity index futures lost some ground but have recovered and some.

China's Official PMIs were released over the weekend, all steadily in expansion. The private survey manufacturing PMI was released on Monday, its close to a decade high (graph below).

As I post the net changes for most currencies against the dollar are of miinor degrees only from late Friday levels/ There is a sense of waiting now for the US election although I suspect there are still pre-election moves to come in the Europe and US sessions over the next two days. 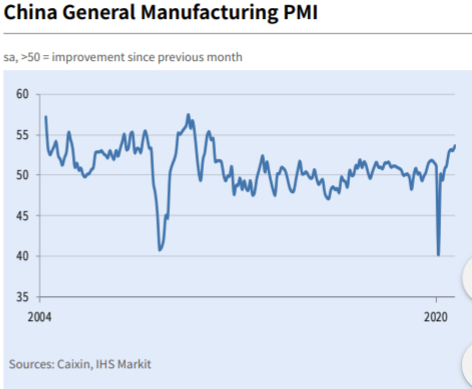