Forexlive Americas FX news wrap: Lots of up and down consolidation in the forex market today

In the US debt market, yields are lower on the day with the yield curve flattening by a few basis points. The 2-10 year spread is currently at 53.46 vs 55.36 at the close of business yesterday.

In the US stock market, the major indices are ending the session with mixed results:

IN the forex market, the CHF was the strongest. The GBP was the weakest. the USD was mixed with gains vs the EUR, GBP, and CAD and declines vs the JPY, CHF and NZD. The AUDUSD was near unchanged on the day. 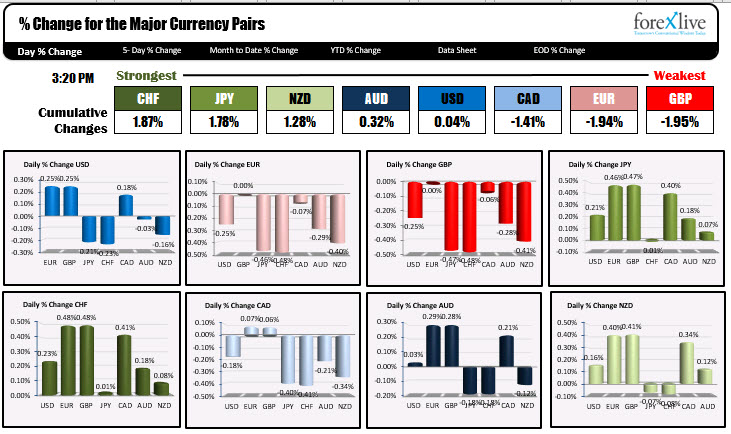 There was a bit of consolidation in the forex market as the markets digested weaker housing starts but better building permits.
On the coronavirus front today, the stock market was hit on the back of a 11% jump in hospitalizations in Texas.   Florida and Arizona remain hotspots. NY is a bright spot. The run lower in stocks, however,  was quickly reversed as traders are becoming more immune to the regional jumps.  New highs were made in the NY afternoon trading.
Next week, Pres. Trump will be visiting Arizona where he will appear at a rally organized by young Republicans although there are no age restrictions.  Pres. Trump speaks in Tulsa on Saturday at another election rally.   Will masks be worn?
Later in the day, stocks reversed course after an article in the WSJ - citing former defense advisor John Bolton's "to be released" book - that Pres. Trump pleaded with Chinese leader Xi for domestic political help. That Trump put personal political goals for his reelection ahead of national security, and that he ignored Beijings human rights abuses led to late selling.  Never a dull moment.
Fed Chair Powell completed his twice a year testimony on Capitol Hill. Today he answered questions from the House Financial Services committee. Comments were in line with yesterday's comments including his call for more stimulus and cautiousness about the sustainability of the recovery given the uncertainty from the coronavirus and the sharp employment losses.

The price action in the forex market was up and down choppy for most of the pairs in the NY session. The USDJPY did buck that trend  when it moved to new session lows as the day moved to the close.  The move lower came after the 2nd look below the 100 hour MA at 107.263. That move tilted the bias back to the downside for the pair.

The EURUSD did move to the lowest level sine June 4th when it fell below the June 12 low at 1.1212. However, that break could only get to 1.1206 before the price bottomed and moved back higher into the close. The price correction took the price back up to 1.1240.

The USDCAD was a another currency pair that saw the price make a failed break. For the loonie it was a move above its 100 hour moving average currently at 1.3582. The price high reached up to 1.35936 before rotating back down to 1.3540 in the early New York afternoon. The price is currently trading at 1.3571. It will take a move back above the 100 hour moving average to solicit more buying.