German bund yields are rocking and rolling and the European bond market seems to be the only market reacting to the EZ GDP news. The euro didn’t feel like partying yesterday and bonds are making up for it. €4bn bunds went off at auction yesterday at 1.80%, , the highest since Feb 2012.

The yield gap is closing fast between German and Spanish/Italian bonds as the hopes of a recovery rise. The market is following the path of the UK and looking forward to future interest rate moves rather than the forward guidance given by Draghi. While we should expect yields to rise on a recovery the ECB will be watching closely that they don’t get out of hand. If they do then we can expect some strong words at the next ECB meeting to dampen long term interest rate expectations.

Pre-financial crisis yields were up at 3-5% on obviously higher ECB interest rates. Yields coming down in Spain and Italy will be welcome for those countries funding needs. 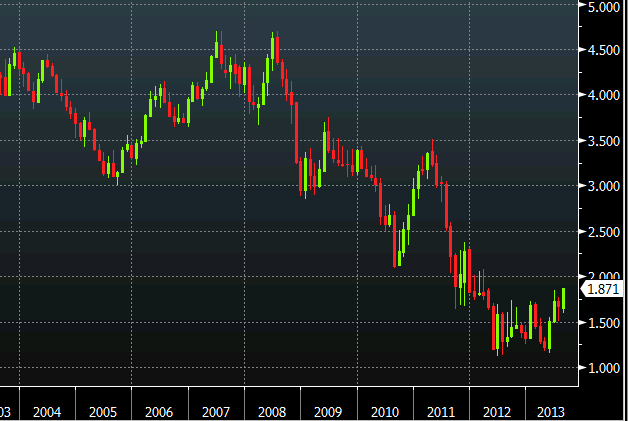 German 10 year yields off to the moon

Overall this should be positive for the euro but it doesn’t want to play. The cards are stacking up as to why the euro should be moving up. If it’s just summer trading then as I said earlier the likely move is up when we hit September.