Do you think the FX market has slowed down in 2019? 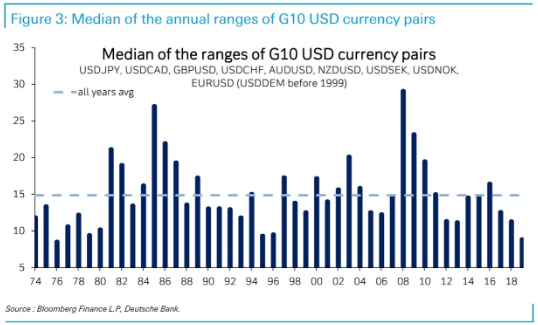 h/t @ Scutty
ForexLive
Well, you're probably not alone in thinking that. According to Deutsche Bank, the median ranges of G10 dollar pairs so far this year is the lowest since 1976.
If you think about it, that's hardly a surprise given the key factors driving the market for the better part of the year:
1. US-China trade talks
2. Brexit
3. Slow weakening in global growth
4. Central banks loosening monetary policy
Looking at US-China trade talks and Brexit, it is more of the case that the two events have helped to paralyse markets more than anything else.
For the former, after each key phase of talks, markets are left hanging (for weeks) and waiting on any concrete progress/developments only to fall into the same trap over and over again - like what we are experiencing now.
As for the latter, it is similar as the limbo and uncertainty continues to drag on and on to the point where we even saw the UK change prime ministers. And yet, the issue still isn't resolved as we round off the year with a second election in three years.
Meanwhile, the gradual slowdown in global growth goes hand-in-hand with central banks opting to ease policy. If you look at things individually, the slowdown in Europe, Australia and New Zealand have been well telegraphed since last year.
It is a case of inevitability that we're seeing their respective central banks react to the economic situation rather than markets being forced to significantly price in those moves.
As for the Fed, the more aggressive rate cuts initially caught markets by surprise but the dollar has kept rather steady for the most part given trade and geopolitical uncertainty - and the fact that the US remains the cleanest shirt among a dirty pile.
The real action this year hasn't been in the FX space; I would argue that it was in bonds and gold and it should be a similar case again for 2020 unless the factors above exacerbate further or are taken off the table - which is unlikely.
Even so, bonds and gold will have their respective plays given how much all those factors have a say in terms of risk pricing in the bigger picture.
As for stocks, the past few days basically epitomises the market's appetite throughout the year. I don't think there's more to say to that.