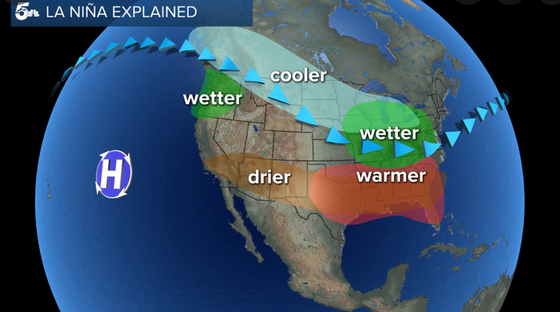 US natural gas hit an 8-year high yesterday and the outlook for what happens next -- and the potential for a spike -- now depends on the weather this winter.
US forecaster CPC, which is a branch of the National Weather Service, now says a transition from ENSO-Neutral to La Nina is favored in the next couple of months with a 70-80% chance of La Nina favored this winter.
La Nina could be bullish natural gas prices because in New England, the midwest and Canada it means both colder and wetter winters. Though the outlook is nuanced because in New York City, it generally means warmer but wetter winters, while in the south it's drier and warmer.
Ultimately, it's tough to say how that will all shake down because in the midwest, 65% of homes use natural gas for heating while the southeast predominantly uses electricity. There's so much variability in weather. La Nina also formed in 2020 and the winter in Texas certainly wasn't dry or warm.