There is a growing sense that monetary stimulus is reaching its limits, with some advocating for the BoJ and ECB to term out their inflation forecasts in order to signal that reaching two percent, while still the objective, will simply take longer.

We are skeptical. First, the BoJ pursued this playbook in its January easing, downgrading its FY2016 inflation forecast materially, while shifting from large policy surprises in Apr. 2013 and Oct. 2014 to incremental easing (the shift to negative rates). The Yen appreciation since then has unwound all the improvement in our proxy for market-implied inflation expectations (Exhibit 4). 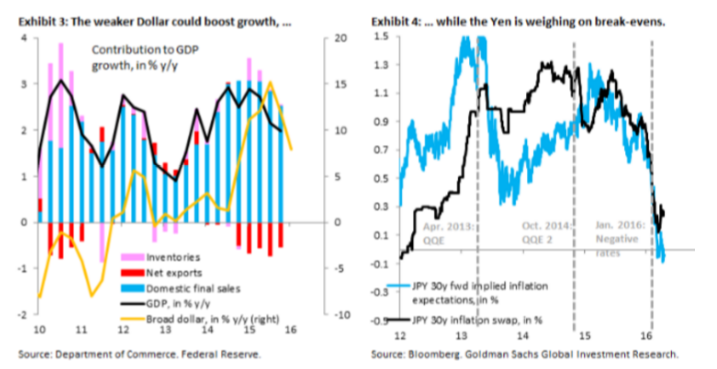 Second, the rise in the Yen and the resulting drop in inflation break-evens is an existential threat to the Kuroda regime, given that it could undermine all the progress since 2012. We think the most reliable gauge of how effective QQE has been is portfolio outflows by Japanese residents, which have been running at a record pace over the recent year (Exhibit 5) and as recently as February.

Our view, in contrast to consensus, is that QQE has been highly effective and that he BoJ has no choice but to double down,with the most potent signal a shift back to balance sheet expansion (and away from negative rates), in sympathy with the ECB in March and consistent with Governor Kuroda's speech at Columbia University last week.

Our strongest conviction is for $/JPY higher in coming months as a result.