How will the dollar perform in H2?

An in-depth look at the factors driving the dollar 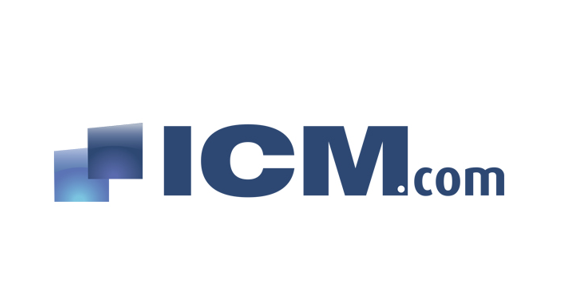 The dollar index is about to end the first half of the year with a gain of almost 2%, thanks to the Federal Reserve upbeat June meeting. The index, which measures the US dollar performance against a basket of the world's major currencies, had a roller-coaster performance. The greenback strengthened during the first quarter as the US economy recovered faster than rivals, but as soon as others picked up with the help of a faster vaccination roll-out, the dollar gave up gains.

What matters for the dollar going into the second half of the year?

The last Federal Reserve meeting took place on the 15th and 16th of June. The Federal Open Market Committee kept the Federal Funds Rate at 0.00-0.25%, and the asset purchases program at $120 billion, buying $80 billion a month of Treasury securities, and $40 billion a month of mortgage-backed securities. However, the committee raised the Interest on Excess Reserves by 0.05% to 0.15%, and the Reverse Repo Rate by five basis points also to 0.05%. These changes are technical, and they ensure that T-bill rates do not go into the negative territory. 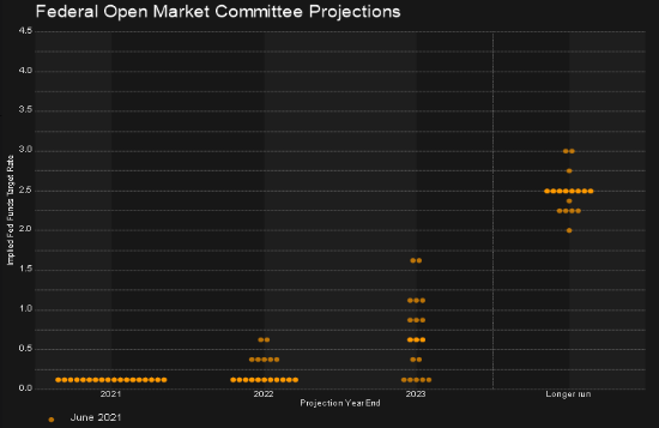 There are several reasons behind such a shift in the view, and they should be monitored closely to know where interest rates could go. If the Federal Reserve tightens policy sooner than expected, the dollar will benefit relative to peers. The Fed is trying to hold a balance between its two mandates of having price stability and full employment. The committee will find it hard to tighten policy to tackle inflation (which they believe is transitory) and hurt the labor market recovery.

The discussion over whether the current rise in inflation is transitory or permanent is never-ending, and only time will prove who is right and who is not. If we chase the reasons behind the spike in prices, we can find them clearly, and we can even argue that such factors are transitory, but the real question would be, for how long these factors will prevail? The chart below is showing the US Personal Consumption Expenditure less food and energy rose by 3.4% year on year, its highest since 1992.

We all know that the COVID19 pandemic disrupted supply chains worldwide, and many countries are still applying restrictions and didn't decide yet on reopening their economies fully. The variants are still coming out now and then, threatening communities and renewing lockdown measures. Thus, supply chains will remain under pressure, but the activity is becoming better and will progress as soon as countries speed up their vaccination plans.

Since the covid19 lockdowns forced people to stay in and limited their options. As countries lift restrictions, citizens will resume their activities, and they have plenty of cash to spend (thanks to supporting programs and fiscal spending), the savings rates soared during the past couple of months, where spending those savings could be considered as a new stimulus plan to the economy. However, if we have a clear unbiased look, we deduce that most of the support programs will end by September, and there are no chances for renewing until now. Thus, citizens will have to watch out for spending again, reducing the demand pressure.

Most of the tools used in our daily life activities are operating via chips, from our smartphones, computers, cars, etc...  The pandemic brought a global chip shortage, which reduced the supply of many items from small electronics to cars.  The demand for such items picked up while supply remains short, prices rose significantly. A small example shows the impact of what happened on the consumer price index. The price of a used pickup truck in the United States rose by 46% over the past twelve months, the price of used SUVs increased by 31%, sedans by 30%, and much more. Chip factories are slowly getting back into production, meaning that this chip shortage could turn to be temporary. Moreover, Biden's administration is providing $75 billion in direct investments for domestic semiconductor manufacturing. The aim is to solve this issue and reduce the dependency on Asian manufacturers.

Oil prices recovered significantly as top producers managed to deal properly with their output to escape the covid19 nightmare. The West Texas Crude oil went from negative territory in April 2020 to its highest levels since 2018, recovering from all the losses. Gasoline prices in the United States rose to $3.19 per gallon, the highest since 2014. However, many risks could disrupt the current upside rally in oil prices, and reduce the pressure on the consumer again.

To conclude on inflation, numerous factors were causing deflationary pressure during the past years, from technology to demographics and more. They will come into play again as the current factors recede, with life going back to normal. The chart below shows an example of what the Fed is expecting when it comes to inflation. Lumber prices soared to an all-time high of $1711 on weak supply. However, when supply started to catch up with demand, the price fell again to $758. Therefore, the price pressure on home builders will ease in the coming period, and prices paid by consumers will decline.

Will the Federal Reserve wait for full employment to tighten?

The Federal Reserve officials were always talking about the difference between the unemployment rate and real unemployment. The chart below shows the unemployment rate and the US labor participation rate. Real employment progress could be seen with a drop in the unemployment rate and a rise in the labor participation rate. This implies the economy is progressing, creating jobs, and the labor supply is following. Currently, the US job openings are at a record, but the labor supply remains weak, due to high unemployment benefits, lack of childcare keeping parents at home, etc... On the other hand, 2.7 million Americans left the labor force. If we match these numbers together, we can forecast if the US economy continues creating around 500 thousand jobs every month, the US economy could be close to pre-pandemic labor market levels by the fourth quarter. Therefore, the Federal Reserve could have the room to taper asset purchases during the fourth quarter without worrying about hurting the labor market recovery.

To recap, the best scenario for the Federal Reserve to normalize monetary policy would be with a drop in the real unemployment rate and inflation remaining above the 2% target. The dollar could find a solid boost from policy normalization. Below are the probabilities for the Fed's interest rate hikes, as these probabilities move higher, the dollar will gain more strength. 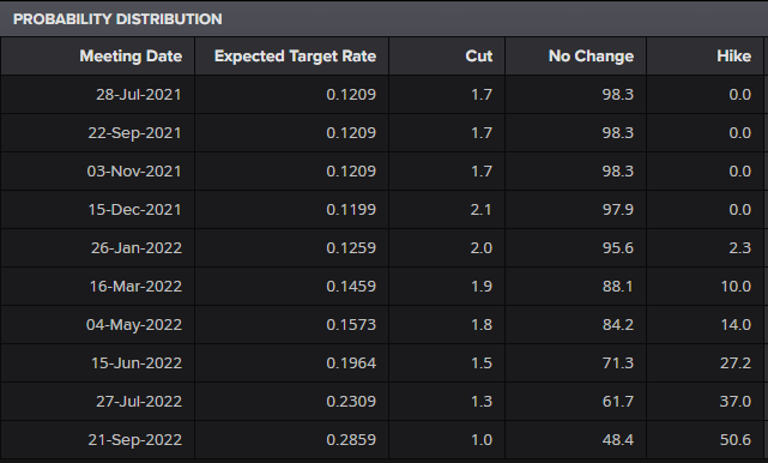 The dollar spiked after the Federal Reserve meeting to 92.40, the highest since early April. However, the one-way extended move, triggered some profit taking where the dollar pared partial gains the week after. This week, the dollar has been trading inside last week's range as investors search for drivers, with eyes on the June jobs report, which is coming out on Friday.

The Bearish scenario: the dollar index fails to break above the recent high, and gets rejected at the 55-week exponential moving averages. The index moves lower again to retest this year's low near 89.20, and the bottom of the range at 88.20 would be an extended target.

This article was written by Wael Makarem - Market Analyst at ICM.com.
Invest in yourself. See our forex education hub.