Atlanta Fed GDPNow estimate back above 3%. Rises to 3.3% for 4Q growth. 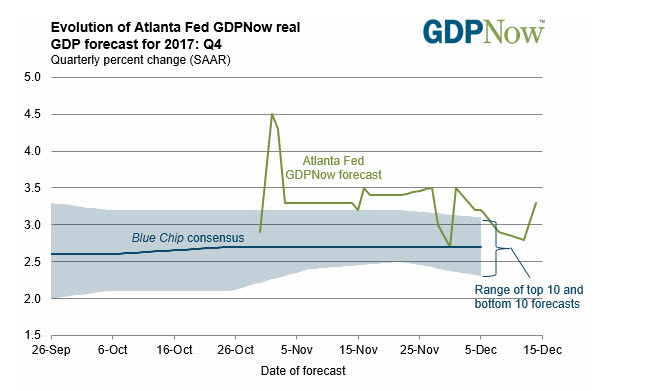 The GDPNow model forecast for real GDP growth (seasonally adjusted annual rate) in the fourth quarter of 2017 is 3.3 percent on December 14, up from 2.9 percent on December 8. The forecast of fourth-quarter real consumer spending growth increased from 2.5 percent to 3.2 percent after yesterday's Consumer Price Index report from the U.S. Bureau of Labor Statistics and this morning's retail sales release from the U.S. Census Bureau.

The next GDPNow update is Tuesday, December 19.

The US GDP has been above the 3% level in Q2 and Q3.  It is going for the hat trick in Q4.  I hope the tax revenues start to kick in. Otherwise this tax cut story being funded by increased tax revenues from increased growth toward 3%, will be in trouble.