Can the BOJ meet its 2% inflation target before FY2019?

The short answer to the question is no 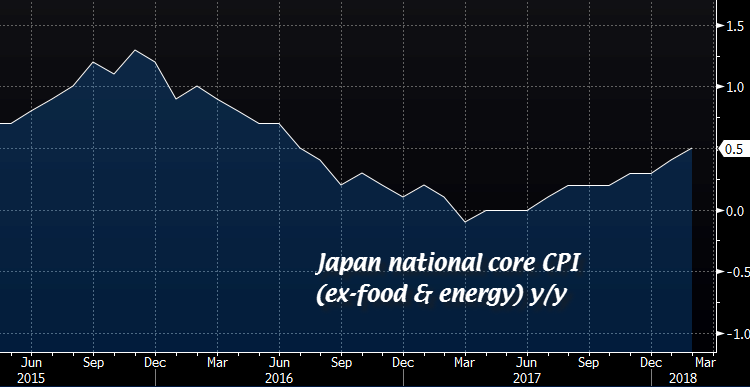 If there's anything that Kuroda deserves, it is praise for being so persistent and undeterred in his commitment to try and reach the 2% inflation target that is set out by fiscal year 2019.
The latest headline reading at the national level doesn't look too bad at 1.3% y/y, but the BOJ's preferred (the core reading) is only at 0.5% y/y.
Not exactly the stuff which screams "we are closing in on the target".
Although the trend is looking to be on the right track, the biggest issue for the BOJ is whether or not the rise is sustainable. When you look at conditions in the labour market, unless Japan decides to employ foreign skilled workers there is no indicator to suggest that we will see inflationary pressures arise from a tighter labour market.
Add to the fact that Japanese companies are seen not boosting wages by the 3% level that Kuroda and Abe wants, tells you that it's an ongoing challenge still to change the "deflationary" mindset in the country.
So maybe this is something the BOJ and Japanese authorities need to reconsider.

The Japanese economy has been performing rather decently up until the end of last year, where we saw the longest stretch of GDP growth since the 1980s. And that comes even with inflation being not near the 2% target to support so-called "strong" economic growth. That could suggest that the economy's problems may lie somewhere else besides the supposedly "deflationary" mindset.
And the real test for that will come this year. With the Japanese yen already strengthening by almost 6% against the US dollar so far, it will add further woes to the BOJ and Kuroda's goal of achieving the 2% inflation target.
If inflation expectations and actual inflation pressures start to wane once again but the economy is still able to grow at a modest pace, it's about time the BOJ starts reconsidering how exactly does the 2% inflation benchmark framework actually fits into the Japanese economy?
The rise in the yen has more than likely already dampened economic growth in the first quarter of this year, so that means that the BOJ will continue to be stuck with the "still a distance to the 2% inflation target" and the "powerful monetary easing" rhetoric.
But Kuroda should take comfort, he's done all he can really. While it is his job to prime the market and put up a front of confidence that the BOJ believes that they can hit the 2% inflation target by fiscal year 2019, you can't blame him if deep down inside he doesn't believe in it.
Because let's face it, at this point it really does look like a pipe dream more than anything else.