When people asking me what's keeping me awake at night right now, here's how I respond:
And that's not just because Chinese news and data often lands when I should be sleeping.
This combination is more worrisome than anything in China in years:
Without detailing all that (which I have many times), I'll point out that the counter argument is that Beijing has plenty of ammunition. That's absolutely true and it's a good argument.
ING is out with a note today calling for a cut in require bank reserves:

We forecast a broad based RRR cut of 0.5 percentage points in October. Today's weak data and the cumulative impact of policies mean the economy needs more liquidity to lessen the impact of rising credit premiums.

The other lever the PBOC could pull is the 5-year loan prime rate. The next PBOC decision date is Sept 22, before the FOMC. They could end up overshadowing the Fed.
Today's data showed retail sales up 2.5% y/y compared to 7.0% expected. Here's how a spokesman from the stats bureau tried to spin it. For me the weak excuses made the number even worse:
This isn't a one-off. Chinese numbers have been bad for months and the taps of  growth haven't exactly been thrown open. Instead, China is making even harsher moves, including today's announcement on a review of casino licences. That sent shares of gambling operators down around 30%.

The slump came after Lei Wai Nong, Macau's secretary for economy and finance, gave notice on Tuesday of a 45-day consultation period on the gambling industry to begin from the following day, pointing to deficiencies in industry supervision.

Here's a look at the Hang Seng: 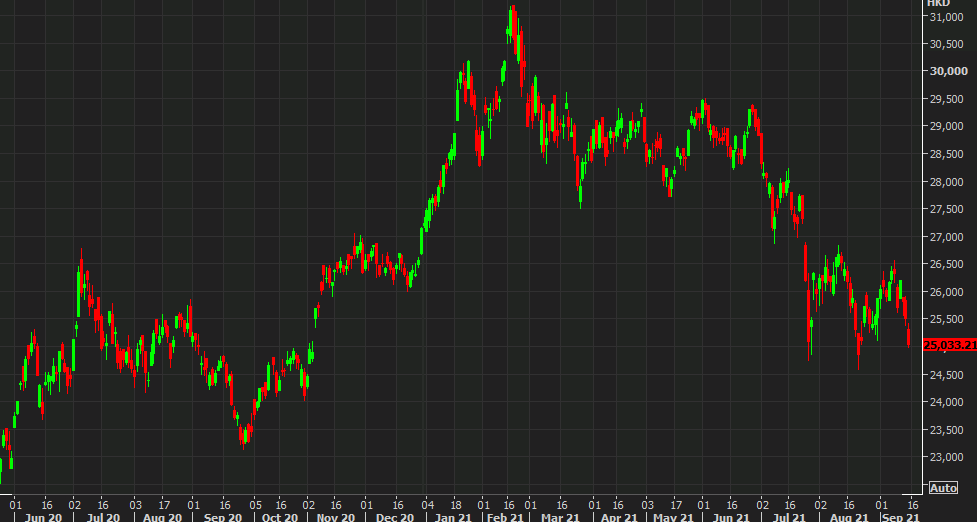