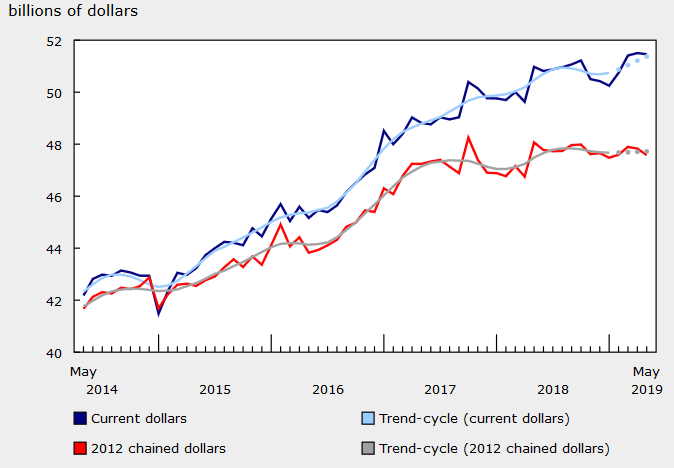 Poor numbers but it's the first decline in four months and May weather was poor in the bulk of the country. Still, the market isn't liking it and USD/CAD shot up to 1.3095 from 1.3060 before the data. The loonie can brush off falling oil, or weak data; but it can't withstand both.
Digging into the details, the big drag was lower sales at food and beverage stores, which were down 2.0% as supermarkets fell 2.0% and beer, wine and liquor stores declined 2.7%. Separately, closing stores were also soft, down 2.7% and general merchandise stores -1.1%.
Others:
Looking through the details, there is less concern than the headline. There were gains at the more economically-sensitive spots. A drop in supermarket sales looks like an anomaly.
It's still strange to read something like this in the official report: "Sales at cannabis stores (+14.8%) rose in May, surpassing $85 million. This increase marked the third consecutive month of double-digit growth." How could food sales be so low with those kinds of numbers?