Espirito Santo International is the top level of the series of parent companies that own Portugal’s second-largest bank, Banco Espirito Santo. They’ve asked the courts for a ‘controlled management’ regime, which is an orderly bankruptcy reorganization. The company missed a commercial paper payment earlier in the week so this shouldn’t be a big surprise.

Espirito Santo Group owns 20% of the bank, then Rioforte owns 49% of the Group and then Espirito Santo International is the parent of that. The empire is the business arm of one of Portugal’s wealthiest families. Earlier this week Rioforte applied for bankruptcy protection.

The thing about creditor protection is that it can cause dozens of unintended problems. Espirito Santo owns Portugal Telecom, which is in merger talks.

Who knows how many hedges and derivatives contracts are on the books that will have to be unwound and if it’s disorderly that can cause a squeeze elsewhere. Meanwhile, a run on the bank is possible at any time. The government has been very clear that it won’t help out the companies (but it could help the bank).

Earlier today, the ECB member from Portugal — Costa –said the bank has been ring-fenced and depositors are not at risk. Shares leveled off in the past couple days but were still down 12% on the week, down almost 70% since April and 95% since 2007. 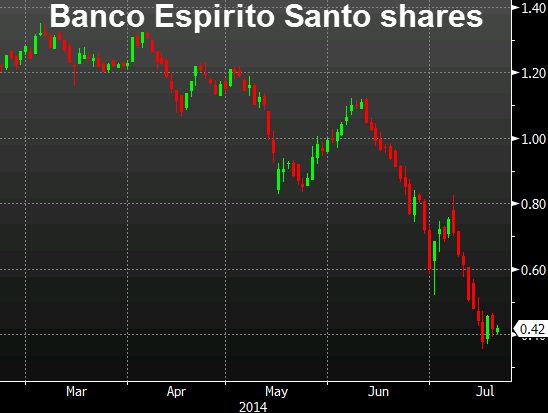 I wrote more about the how the incestuous Portuguese corporate governance threatens to bring down the system earlier in the week.