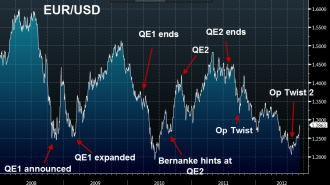 It’s quite a bit more instructive that I expected. Euro strength has been typical after the announcements.

Obviously, one chart doesn’t tell the whole story because Europe had so many of its own issues but it’s worth pondering.

For more on QE, check the latest stories in the MNI feed on Fedwatchers.

Update: I was fractionally off on the QE2 arrow (and have now fixed it) but it makes a difference. EUR/USD peaked and then fell after the QE2 announcement. Of course, the announcement was extremely well telegraphed so it was a ‘sell the fact’ type trade. I would argue that there is a significantly higher level of uncertainty regarding QE3.