There was plenty of weekend news to prompt movement as markets opened for the week, and more incoming with Federal Reserve Chair Powell giving an interview to US TV show 60 Minutes that aired Sunday evening in the US.

Powell was, of course, the main focus and he had plenty to say on monetary and fiscal policy (plus a lot more). His key message was the Fed can, and will, do more if necessary (see bullets above - the post on Powell's remarks contains a link to the full transcript of the interview if that is of interest). Gold was a big winner during the session, adding to gains further as it rose above 1760; Powell's promise of loose policy doing it no harm at all. Silver perfomred well also.

Back to the weekend news, for GBP is was negative. Bank of England Chief Economist Haldane spoke on the Bank pondering negative rates and other news indicated lack of progress on the Brexit negotiations prospects. GBP opened lower in very early trade, circa 1.2075 but as the Asian morning progressed it recovered back above 1.2100. 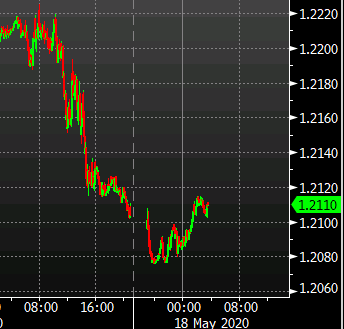 It was a better session for currencies pretty much across the board. There were the usual slew of US-China tension items about and they did contribute to a little currency weakness early but these were shrugged off as the morning ticked on. AUD, EUR, GBP (already noted), NZD ... all higher. CAD was a performer, with oil (WTI) above $30 for the first time in weeks CAD was a beneficiary. Unusually, there was no awful news for oil out over the weekend.