In other markets near the close:

In the US stock market, the S&P index and NASDAQ index are closing lower. The Dow industrial average is closing the day out with a modest gain.. The major indices are ending the session closer to their lows for the day. In the European markets German DAX, France CAC and UK FTSE all closed near unchanged levels. The Portugal PSI 20 was the biggest gainer at 0.61%, while the Spain's Ibex was the biggest loser at -0.16%.

In the US debt market today yields moved to the downside with a flatter yield curve. The 2 year yield fell by -1.4 basis points, while the 10 year decline by -3.5 basis points. That flattened the yield curve by over 2 basis points for the 2 – 10 year yield spread.

In the forex market today there was a lot of ups and downs. 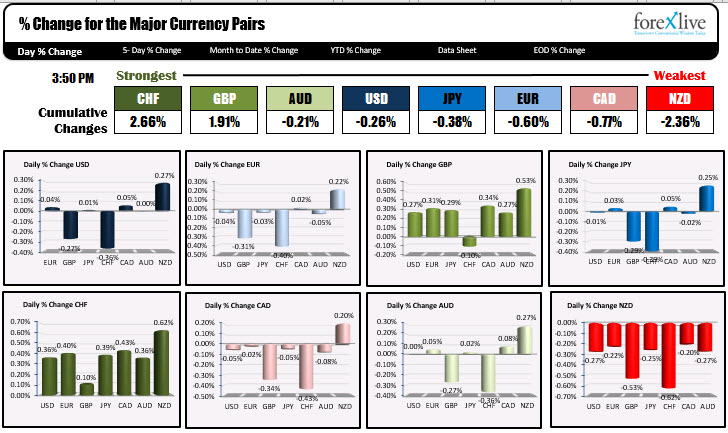 Overall, the Swiss franc was the strongest of the major currencies. The US treasury put Switzerland on the watchlist for being a currency manipulator. The idea is that the Swiss National Bank sells CHF as an offset to safe haven flows from say US trade war, or impeachment,or other geopolitical risks.   Sounds like the US is starting to focus on that country for potential trade issues.  The weakest currency today was the NZD.
PS the US treasury did move China to the watchlist from being a currency manipulator before the planned signing of the Phase 1 trade deal on Wednesday.   The USDCNH (offshore yuan), has been falling into the signing of the trade deal (stronger CNH).  Looking at the daily chart, however, the price tested a swing area and trendline at the low price today before rebounding and closing near the day's high. The swing area support comes in at 6.86079 to 6.8708 (closing at 6.8900).  A move below the 6.86079. A move below would solicit more selling for the pair.  Be aware

Technicals for other major currencies:
In other news, Mitch McConnell said that the impeachment trial Pres. Trump will likely begin next Tuesday. That is contingent on House Majority Leader Nancy Pelosi sending the 2 articles of impeachment to the Senate.
US CPI came in touch weaker than expectations at the 2.3% versus 2.4% estimate.
Finally Fed's Esther George (a hawk) said that it's appropriate that the Fed keep rates steady and assess the impact on the economy.
Good fortune to trading.