When you have a day with a laundry list of economic data, the chances are there will be some good (i.e. Philly Fed index today and Initial claims), there will be some not so good (retail sales and IP were stinkers). That is what we got in the US today, and as a result, the price action reflected that fact for some currency pairs

Now overall, the greenback went lower, and you can say the weaker Retail sales was a catalyst (negative signs no matter how you sliced the different pieces).  However, driving the greenback was also the flow into the risk currencies on the back of a strong US stock market (up 1% to 1.5% in the major indices).  It seems currencies like the AUD, NZD and CAD are enjoying going higher when stocks move higher.

In other news today, the BOE started the NA session by announcing rates were unanimously kept unchanged (as was QE). The BOE did say they would ease more if needed but the post Brexit growth was better.  The GBPUSD was lower as NA traders entered but did turn around helped by an article The Telegraph saying that the EU might squeeze the UK into abandoning the Brexit.  I am not saying that it was the only thing but a move higher did correspond with talk of the article (click here).   So after being down all day, the pair is ending the day little changed at 1.3239. PS the 100 bar MA on the 4-hour is at 1.32416 and the 100 hour MA is at 1.3246. They are key levels to get above and stay above if there is a rally higher.

Over in pairs like the EURUSD and USDJPY, the price action was a bit helter skelter.  For the EURUSD, wIth one day to go in week, the low to high trading range is 78 pips (Remember  when the range for a DAY was about 120 pips. That was for a day).  Seventy eight pips ain't all that much. In fact below 125 pips would be a record low trading range for 2016.  So there is room to roam (i.e. either take out the high or take out the low.   Will it happen?  It seems like the high and low are a mile away, but from where we are going out, the highest high is 40 pips away,and the lowest low is 38 pips away.   If you can pick the right way, and get momentum going your way, that room to roam, may make for a good end of week gain.  Do you have an bias? Technically, the EURUSD has the 100 and 200 hour MA at 1.1331-34. Stay above that is more bullish while moving below is more bearish.

For the USDJPY, the market tried to move higher in the NY session but fell under the pressure of the dollar later in the US day.  It's 100 and 200 hour MA come in at 102.32 (they both are at the same level).  The closing level is about 102.08.  Next week the BOJ meets and despite all sorts of chatter adding more stimulus, the pair cannot hold a rallly.  Must be frustrating for Kuroda and BOJ officials.   Ah....who cares about them. Us traders need some action.

Hoping everyone has a super Asian Pacific session under the expert eyes of Mr. Eamonn Sheridan and also a great weekend! 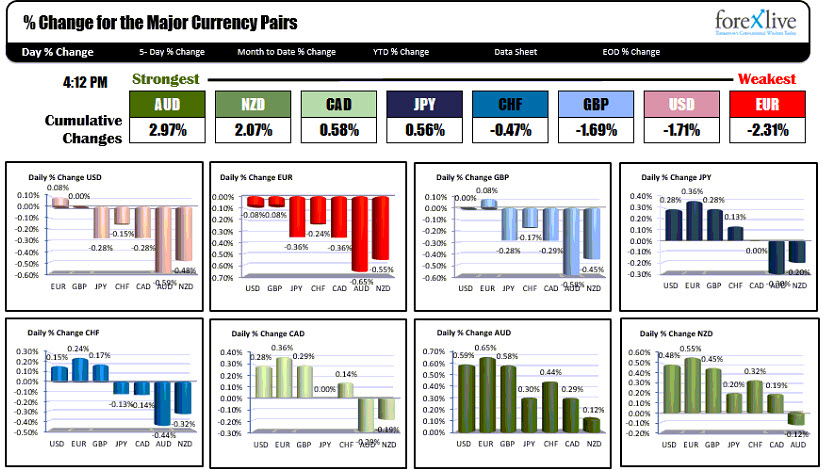