In the forex, the NZD opened the NY session as the strongest of the major currencies on the back of higher QoQ inflation data (2.96% vs 2.27% last quarter). The RBNZ meets next Wednesday (Tuesday night in the US) with expectations of another hike in rates at that time to 0.75% (from 0.50%).  The weakest currency was the JPY followed by the USD as investors shunned the safety of those currencies. In the US, rates were also lower on the day which helped to weaken the greenback a bit.

Below are the rankings of the strongest to weakest of the major currencies. 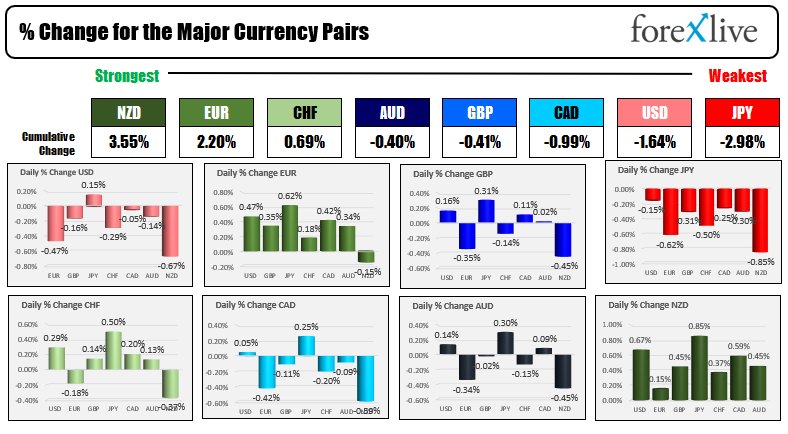 In other markets:
In the US debt market, Yields are ending the session in the reed with the  30 year yield down 2.4  basis points to 1.973%. The two year is only down -0.2 basis points

Fundamentally, initial jobless claims and continuing claims came in its lowest level since the pandemic began. Leading indicators were touched better than expectations.  Feds Williams and Fed's Evans not stop there bias with slightly more hawkish undertones.
Looking toward tomorrow's North American session, there are no US economic releases:
Fed speak has the following Fed officials scheduled:
ECB's Lagarde is expected speak at 1 PM ET.