Yesterday, Feds Williams, Evans and Bostic tilted more to the hawkish side of the ledger. Evans a dove, said that

Today Fed's Waller took his view up a notch by saying:

He finished his comments off by saying:
HMMM... he might have a point there ; )
Also today, Fed's Clarida said:
Earlier this week, Bullard - the most hawkish of Fed members - said he sees two hikes in 2022. So we know where he stands.
The more hawkish slant has helped push the dollar index (DXY) to the highest level since March 2020 and to the 50% midpoint of the move down from the March 2020 high at 96.094 (see chart below).   Get about that 50% midpoint level and there should be more upside left in the bulls tank next week (holiday shortened week due to US Thanksgiving on Thursday). 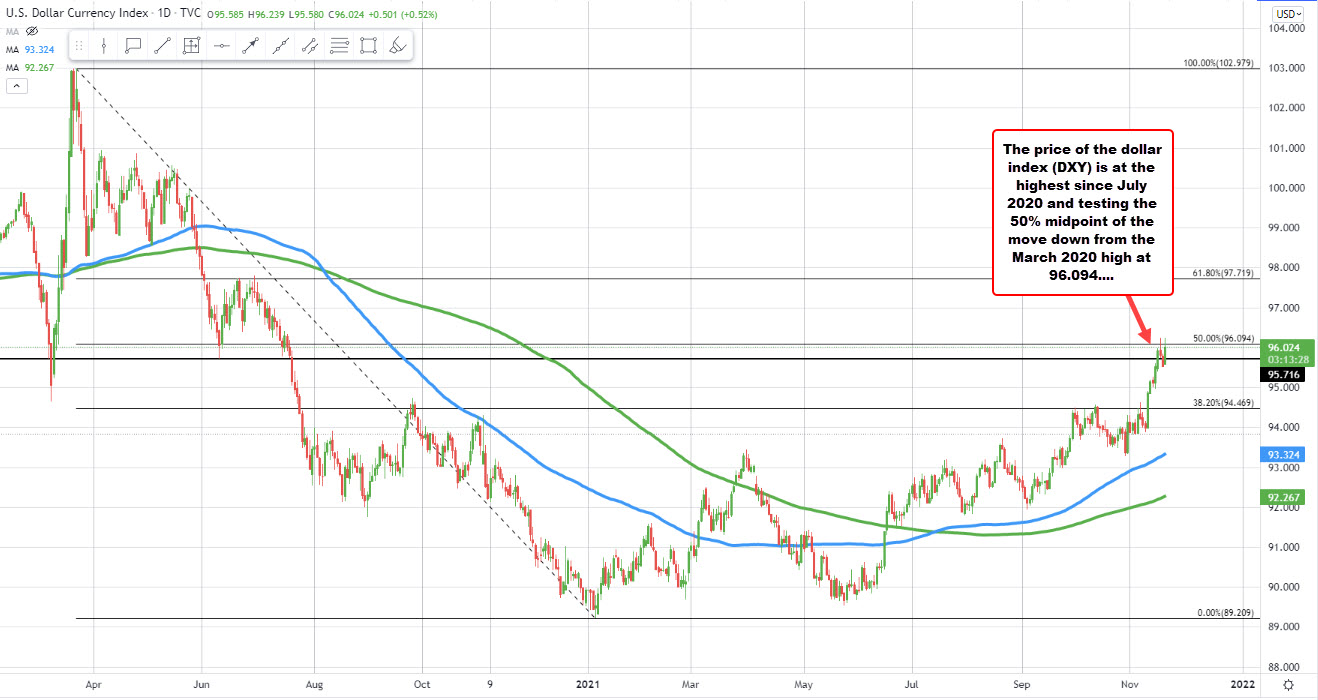 Despite the bullish backdrop, the US yields are trading lower on the day, but off their lows especially in the shorter end. The 2 year yield did reach an intraday low of 0.446% before thinking twice of that directional move after the Waller and Clarida comments. It currently trades back above 0.50% at 0.5088%.
The yield curve flattened on expectations that if the Fed does tighten, it will be successful. The 2-10 year spread is back toward the 100 level (at 103.5) vs 108.5 at the close yesterday.

Helping the yields move lower earlier was the tumble in crude oil prices which is one piece of the inflation story (although not recently). The other pieces are supply chain and tight labor conditions which are feeding the inflation beast.  The December contract moved to the lowest level since October 7, reaching a low of $75.12 (currently trading at $75.62). This week, the price of crude oil fell over 8% from the high of the week to the low today, and is down 12% from the high reached on October 25 (to the low today).  However, it is still well above the August 23 low at $61.72.
In the forex, the snapshot of the strongest to the weakest currencies is showing the JPY is the strongest and the EUR is the weakest, while the EUR is the weakest.   The decline in the EUR was spurred on by the spread of Covid and the lockdown of Austria (starting Monday).  Fears of the spread, weighed on the EUR although Germany said they would not look to lockdown. The USD is ending the session higher vs all the major currencies with the exception of the JPY. 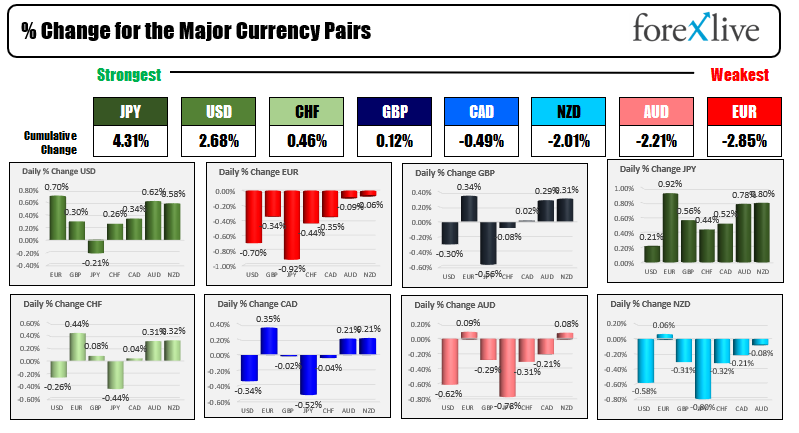 In other news today, the US House successful passed the $1.75% Build Back Better act. Now it goes to the Senate where they can pass it as is (with 50-50 vote),  or slice and dice it up, mostly dependent on what moderate Democratic Sen. West Virginia West Virginia Joe Manchin wants.
US stocks closed mixed with the NASDAQ index making a new all-time high and closing at a record high. The S&P index intraday reached within one point of an all-time intraday high, but backed off and close negative on the day missing the opportunity to close at a record. The Dow industrial average was the worst performer with a decline of -268.97 points or -0.75%. Boeing weighed on the Dow on reports that the 757 would be delayed.
Next week, Pres. Biden decides on his nomination for the Fed chair. Will it remain Powell or will Lael Brainard take over?
Also on the agenda next week is the Reserve Bank of New Zealand interest rate decision on Tuesday night/Wednesday morning in NZ.  The expectations are for a 0.25 basis point rise.  The flash PMI data in Europe and US will also  be released. US durable goods orders (preliminary) is also on the schedule.
Wishing all a happy and safe weekend.