The day was characterized by rebounds in yields (in the long end) and gains in the major US stock indices after the Monday sell off.  Whereas markets were spooked by covid related news from over the weekend, that fear was less today as investors reevaluated the risks from the Delta variant (as least for the day that is).

In the US debt market, yields fell sharply yesterday with over double digit declines at the longer end of the treasury curve. Today, the yields rebounded in the 10 and 30 year portion of the yield curve with the 10 year yield up 4.3 basis points and the 30 year up 6.7 basis points. Yields in the shorter end were still down modestly as traders pushed out the 2-10 year spread by  around 5 basis points from the close yesterday (and back above the 100 basis point level).

In the US stock market, IBM earnings after the close on Monday, led to overnight gains, but after a dip toward unchanged levels near the open, buyers came in and pushed the major indices higher.  The NASDAQ index led the way with a gain of 223 points or 1.57%. That gain erased the decline of -152.25 points yesterday. The S&P and Dow also moved higher but both still had gains that were less than the declines from Monday's trade.  The Dow rose 550 points after declining -725 points yesterday. The S&P gained 64.71 points after falling -68.65 points yesterday.  From a technical perspective, the rise in the Nasdaq index stalled just ahead of its 50 and 100 hour moving averages between 14556 and 14569. The high price reached 14555.70.  For the S&P, it briefly breached its 100 hour MA at 4336.59, but backed off into the close (the high price reached 4336.84).  Those MAs will be eyed as a barometer for buyers and sellers in the new trading day.

In the European markets, the indices all closed higher and erased some of their declines from Monday.  The gains in Europe were led by the France Cac which increased by 0.81%. The German Dax (+0.55%) and UK FTSE 100 (+0.54%) were higher as well, but lagged.  Below are the summary numbers for the major North American and European indices on the day.

In the forex market, the US dollar rose against all the major currencies with the exception of the CAD.  However, the dollar did close well off its intraday highs for the day.  The CAD was the strongest of the majors, while the JPY, NZD and CHF are ending as the weakest (all are fairly close together). 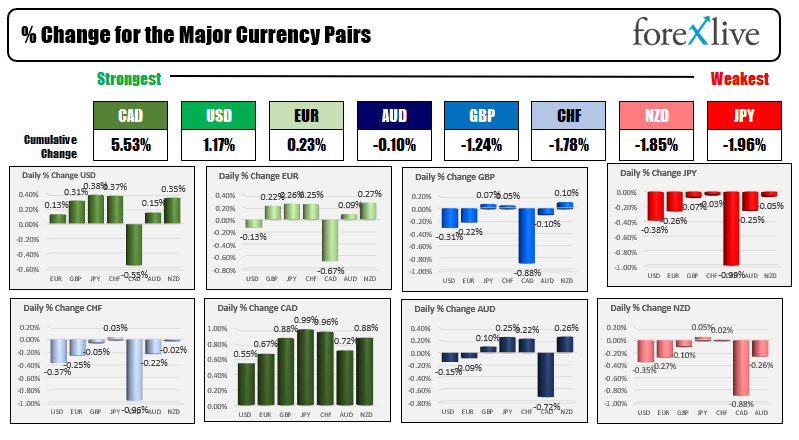 Looking at some of the technical levels going into the new trading day shows:

USDCAD: The USDCAD moved sharply higher yesterday on the back of lower oil prices but consolidated between 1.2730 and 1.2784 in the Asian and London session.  Into the London close, the price broke below the 1.2730 support floor and stayed and moved lower in the NY afternoon session. The price is trading at 1.26775 into the NY close with the next target coming in at the 38.2% retracement of the move up from last week's low at 1.26598. Below that, the rising 100 hour moving average is currently at 1.26387.  On the topside, traders will be eyeing a broken trendline at 1.2706 as a potential resistance level on a rebound.

EURUSD: The EURUSD moved below a lower trendline on the hourly chart that connected lows from July 7, July 13, and July 19. That trendline cut across at 1.1760. The low price reached 1.1755 on three separate hourly bars. Toward the London close, buyers started to push the EURUSD back higher and above a swing area at 1.17809. That is where the price is closing the day.   In the new day, close support if the buyers are to build on the rebound off the lows today will be eyed at 1.17708.  Hold above that level and further upside corrective probing could see the pair move back toward the 100 hour moving average at 1.1803.  A move below the 1.1770 level and the low from Monday at 1.17632 would have traders looking for a new cycle low (and low going back to  April.

GBPUSD: The GBPUSD fell and closed below its 200 day moving average for the first time since September 2020 yesterday. The price today stay below that moving average as sellers leaned against the level in the early Asian session and pushed the price to the downside. The low price reached 1.35711 before rebounding into the close. Nevertheless the pair closed lower on the day at 1.36209 is around 76 pips from its 200 day moving average at 1.3696. The pair is also below the low price from yesterday at 1.36537. That will be a close resistance level into the new trading day. Stay below keeps the bears firmly in control.