Forexlive Americas FX news wrap: A mixed day for the US dollar after strong 1Q GDP

The first take (they call it the "advanced" release) of the 1st Quarter GDP was finally released (it IS the end of April), and the number was a touch lighter than expectations at 6.4% vs 6.6% estimate.  However, personal consumption rose by an impressive 10.7% vs 10.5% estimate.  Inventories was a drag (which may not be a bad thing going forward for growth).  Trade was a drag QoQ as well.  That too may see a rebound if the trade numbers can see a rebound (less of a deficit on a more robust global Covid rebound) going forward.  Overall, a solid start to the year.
Other data today included the weekly initial jobs data. This week's numbers correspond with the BLS survey week and the claims numbers were the lowest level going back to March last year won the pandemic started to kick in. That should bode well for the next jobs data at the beginning of May.  Pending home sales for March given weaker than expected at 1.9% versus 4.4% expected, but housing data can be difficult to gauge with weather, and the supply and demand conditions. So a gain of 1.9% is still not all that bad.
In other news, earnings for Apple and Facebook, knocked it out of the park after the close yesterday. While Facebook shares soared, Apple shares opened below the after-hours highs, and worked negative by the close (down -0.08%). That price action - and rising yields - were reasons  for a rotation out of the Nasdaq index. The Nasdaq index was up 1.14% at the highs early in the session and reached a low of -0.7% at the low. However, by the end of the day, the major indices rebounded, led by the Dow and S&P which were both up by about 0.7%.  The Nasdaq index ended positive by 0.22%, but given the stellar numbers by Apple, the gains were somewhat disappointing.   In Europe today, most of the indices ended lower with Italy's FTSE MIB being the one exception.

In the forex, the CAD was the strongest of the majors as it continued its run to the upside after the BOC last week announced a taper of their bond buying program.  The JPY was the weakest as it attracting some USDJPY buying on the run up in yields before moving off highs levels as yields stalled and started to come back down.
Looking the cumulative changes of the USD, the greenback had equal % gains vs % losses.  The dollar rose a cumulative 0.61% vs the JPY, AUD and NZD and a cumulative -0.61% fall vs the EUR, GBP, CHF and CAD with ups and downs intraday. 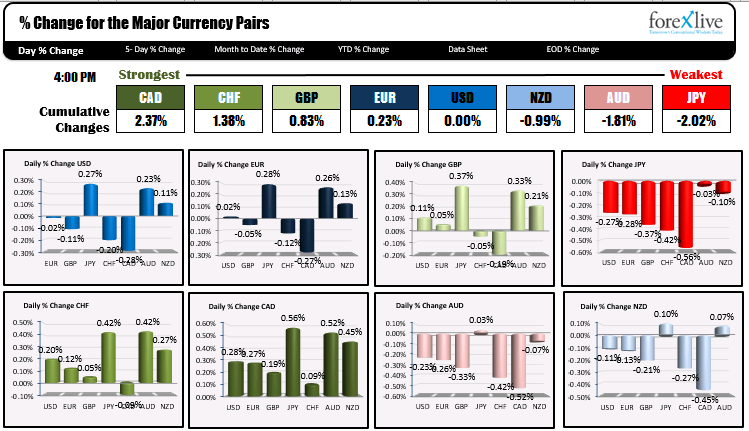 Looking at some of the major currency pairs from a technical persective: