In other markets near the close, the snapshot is showing:

Today, the 2nd shoe fell from the ISM data.  On Tuesday, the ISM Manufacturing index came in much weaker than expected (10 year low). Today, the ISM nonmanufacturing index also came in weaker. In fact, it was the lowest level in 3 years.  Dualing bad numbers from the ISM data.
Moreover, the manufacturing employment number came in at 46.3 versus 47.4 in the prior month. For the non-manufacturing data today, the employment component stayyed above the 50 level but only barely at 50.4 versus 53.1  last month. It was the lowest level since Feb 2014.
The US employment statistics will be released tomorrow at 8:30 AM ET with the expectations for nonfarm payroll to rise by 148K vs 130K last month.  The unemployment rate is expected to remain steady at 3.7% and average hourly earnings are expected to rise by 0.3% or 3.2% year on year.
The weaker numbers likely have traders thinking something on the lower side tomorrow. Time will tell of course.
The initial reaction was similar to the manufacturing release:
However, the shock wore off quickly - that is, the market realized that a Fed ease is looking more and more likely for October. So although the Nasdaq index moved below its 200 day MA at 7713 (the low extended to 7700.00 - a nice round number), the break to new lows was quickly reversed and the squeeze was on.
The major stock indices closed at highs for the day, with the Nasdaq moving to 7872.26 at the high. That is a 172 point reversal in that index. Not too shabby.
The S&P has similar rebounds. Below are the low to high % changes.

Yields tumbled off the data but it did not rebound. Although stocks can cheer a more dovish Fed and rally on that, the US debt market had no reason to recover from the tumble lower.   Earlier this week, the expectations for a October cut was around 40%. The current estimate implied by the Fed funds futures is for a 87.3% chance were cut.  Hence 2 through 30 year yield remained lower.  The yield curve represented by the 2-10 year spread continue to widen. It is up to for 14.78 basis points. It close at 12.12 basis points at the end of trading yesterday.

In the forex, the dollar fell sharply vs the major currencies immediately after the ISM data was released.
The EURUSD moved from 1.0958, to just below the 1.1000 level (the high reached 1.09988).  The 1.1000 level was also home to the 61.8% retracement of the move down from the September 18 high. The natural level of resistance along with the retracement, give sellers something to lean against, and the price spent the rest of the day wondering back to the downside. The pair returned to a swing area at the 1.0964-67 area near the close. That area was home to swing lows on September 23, swing highs on September 26, a swing high yesterday, and earlier in the session today (before the break higher).  It will be the closest barometer for bulls and bears into the new trading day. Stay above is more bullish. Move below and rotation back toward the 200 hour moving average at 1.09488 might be in order before nonfarm payroll is released tomorrow.
The GBPUSD also move sharply higher running from 1.2319, up to and through the 200 hour moving average at 1.2345, and the 50% retracement of the move down from the September 20 high at 1.23921. The price stalled at 1.24125.  An hour or so later, the price moved back below the 50% retracement level and the buyers started to take more profit (helped by the rising stocks).  The pair near the close is trading back by its 200 hour moving average at 1.2345. Like the swing level in the EURUSD, the 200 hour moving average will be the barometer for bulls and bears in the new trading day.
The USDJPY fell below support at the 106.92 level (38.2% retracement of the move up from the August 26 low) the release of the data and fell toward the 50% retracement at the 106.451 level (the low reached 106.477).  The price rebounded but only back up to the 38.2% retracement level at the 106.92 area.  Trade above that level in the new day will be more bullish.  Stay below is more bearish.
The AUDUSD moved above its 200 hour MA at 0.6746, but could not stay above. The run above was the first hourly close since September 18. The high price reached 0.6752, before moving back down. The pair is closing at 0.6740. It will take a move back above the moving average to solicit more buying in the new trading day.
The USDCAD - a day after trading above a 13 day consolidation high at the 1.3304 to 1.3309 area, saw the price move down to retest that level on the weaker ISM, but stall at the area (The low reached 1.3308).  The pair is trading at 1.33419 at the close which is just below the high for the day at 1.33471. The buyers will maintain control above the 1.33039 area going forward.  This month, Canada will not release their employment report in tandem with the US (but will release it next week).
To the Asian session traders, thank you for your support. Wishing you all a happy and safe weekend. 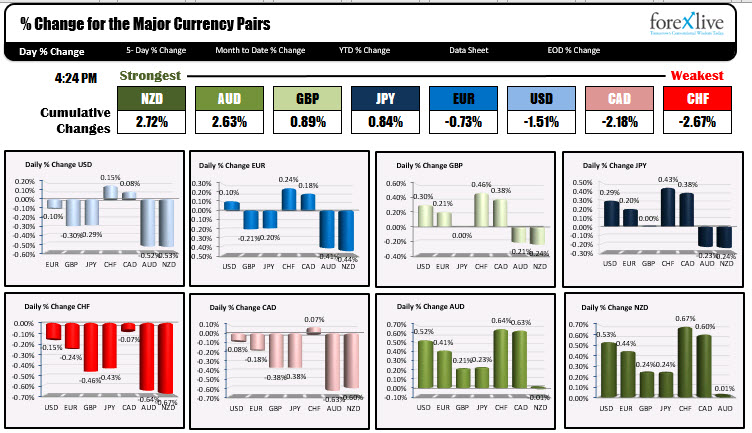