In the US stock market, the market open lower on the back of a deterioration of the US China optics heading into the important trade meetings take place on Thursday and Friday. Today,
When a tweet from an NBA official prompts a reaction, the optics are that respective countries are digging in rather than coming with olive branches.  Him
Unless this stuff is all a smokescreen to what actually might happen at the end of the week, my lean would be that the meetings end early vs any chance that there is any major progress. The chasm just seems a bit too wide and that cooperative feeling is certainly not in the air.
The US stocks sold into the close and are ending the day at session lows for the broader S&P and NASDAQ indices.  The Dow industrial average fell by over 300 points as well.
The S&P index is closing down -1.56%. The NASDAQ index is down -1.67% and the down industrial average fell by -1.19%

In the US debt market, yields are ending a lower, with the 2 year down the most -4.2 basis points. The Fed's Powell announced the potential for a tactical QE from the Fed in the bill sector, helped push yields in the short and down. The yield curve steepened to 11.12 basis points from 9.63 basis points at the close yesterday.

Powell mentioned data dependence 7 times in the speech. There was some wiggles and waggles in the forex markets. For example, the EURUSD did crack to new lows on the break of the 200 hour MA at 1.09466,  but rebounded off the next supprort at the 50% retracement level near 1.09394.   The pair is near 1.09547 going into the close after running up to the 1.0962 resistance level.  Stay below that level in the new trading day, willl keep the sellers more in control. Move above and the bearish waters, turn muddy.  The

Overall, in the forex, the NZD was the strongest currency at the start of the trading day and the GBPUSD was the weaket.  By the end of the day the NZD gave back a lot of the gains on the back of risk off flows (the NZD tends to suffer). 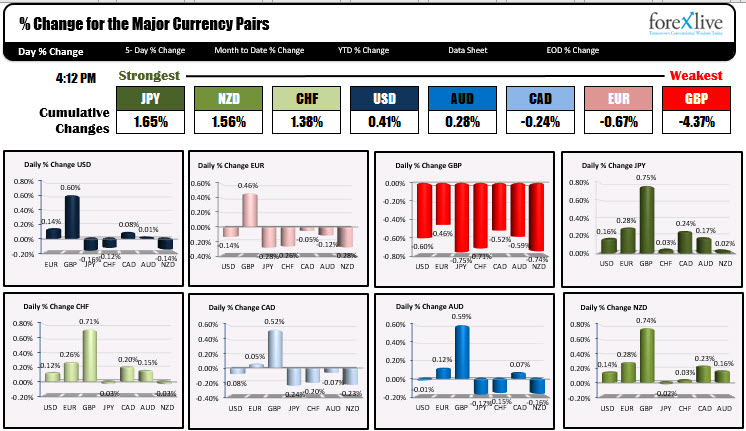 The GBP retraced some of the declines from the NY open, but remained the runaway weakest of the major currencies. Boris Johnson looks for a support, but ran into a frosty reception from Gemany's Merkel today.
As reported from the BBC:
Ouch.
That news did send the GBPUSD to lows, but most of the damage was done coming into the New York session. Nevertheless, the pair was able to extend below the October 1 low of 1.22031, but could not extend below the 61.8% retracement of the move up from the September low to the September high at the 1.21959 level. As a result, the pair is move back above the 1.2200 level and trades at 1.22174 going into the close. In the new session a move above the 1.2226 swing low going back to October 2, may be a straw that weakens the shorts/sellers back. Get above and stay above may see a rotation back toward the 1.2265 area. Without that however the control remains in the shorts hands.
The USDCHF moved higher in the NY session after running lower in the London session. The price moved from New York session low at 0.9904 at the start of the day to a high of 0.9950 during chair Powells speech. That high price however stalled right at the pairs 200 day moving average at 0.99497. The pair is trading at 0.99327 into the close. It will take a move above the 0.9950 in the new day to tilt the bias more to the upside again.
For the NZDUSD, the pair ran higher in the Asian session on the back of government surplus in New Zealand. Those gains were nearly fully retraced in the New York session. Technically, the price moved back below its 100 day moving average. That moving average comes at the 0.6300 level. The last 6 hours of trading in the NY session, stayed below that MA level.  A move above is needed to tilt the bias back to the upside. Until then, the bears are more in control.
The AUDUSD, llike the NZDUSD, moved higher in the Asian session and lower in the NY sesssion. The fall back down, the price below the 100 and 200 hour moving averages at the 0.6738-393 area.  The pair is trading at 0.6726 into the close and it will take a move back above the aforementioned moving averages to tilt the bias back to the upside.