Oh Canada!  The US employment data was released last Friday, so Canada had all the attention to itself today when they released their jobs report for the month of September. The numbers did not disappoint. The net change in employment rose by 378.2K vs. expectations of 150K.  Most of the job gains were in full-time employment with a gain of 334K (vs. 205.8 K last month). Part-time jobs rose by 44.2K.  The unemployment rate fell sharply to 9.0% from 10.2% last month and much lower than the 9.8% expectations. Hourly wages increase by 5.4%. The participation rate rose to 65% from 64.6% last month. All was good news.

The number sent the CAD higher/the USDCAD lower.  Moreover, the move helped to kick start a dollar lower trend that continued in the other currencies in trading today. 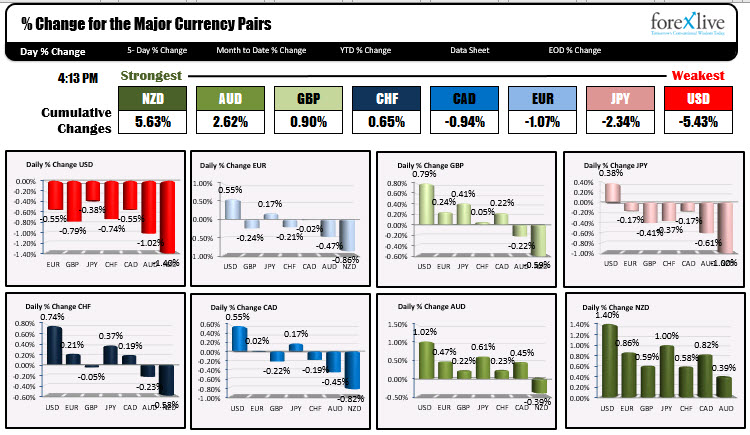 The dollar fell partly on the back of "risk on " sentiment. US stocks market rose smartly once again with the major indices close at the highest level since September 2..  That helped to send flows into currencies like the NZD and AUD.

The dollar may also be lower because Washington lawmakers (and the President) seem to be playing a game on the stimulus where nothing gets done.  This week the President went from "I am calling off all stimulus negotiations until after the election" on Tuesday, to "I want to provide more aid than either party is offering".  Meanwhile, Senator McConnel says the GOP does not want to go over $1.8T. The Dems are at $2.2T and both have other requirements like aid to state and local government for the Dems, and "no liability" for the GOP. PS later toward the close the White House spokesperson said that the White House was now looking for $1.8 trillion max deal (and not better than all of the other deals) .

Do you ever get the feeling where there is so much sarcasm going around that it's hard to tell the truth from reality?

I get the feeling neither party wants a deal, but that's not stopping them spewing off a bunch of lies in the process.

Who knows maybe there will be a surprise deal over the weekend, but if the pundits are right, the Dems have one agenda, the GOP another, and now the President a third.  At the end of the day, the GOP - who controls the senate - will have to approve and vote on a deal at least until January.   The election results in 3+ weeks will decide who controls Washington at that point.  In the meantime, I can't help but think the president will be doing all he can to prop up the stock market, and the Dems will do all they can to shift blame on the President.

Some technical thoughts on the major currencies: