Germany's Schaeuble says everything must be done to stabilise EU

German finance minister speaking from the Eurogroup summit in Bratislava

"We must make sure that the British referendum doesn't result in a further weakening. It's clear we must do everything to stabilise the EU and that's only possible at the level of the 27, there is a wide consensus on that.

There's a broad consensus among a large part of the member states that now isn't about making grand, theoretical plans of what could be done if there's no way to have treaty changes. The EU must focus instead on solving the urgent problems inc the refugee crisis."

Schaeuble highlighting the uncertainty and contagion fears of many post-Brexit vote.

The so called Juncker Plan was introduced in Nov 2014 and is the EC investment plan that:

To achieve these goals, the plan is active in three areas: 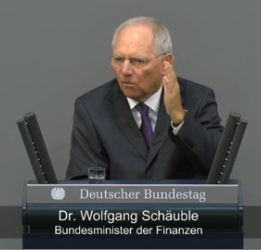 Schaeuble - EU must be stabilised