May non-farm payrolls preview: By the numbers -- big gap edition

The market moves on Thursday highlighted the rising stakes 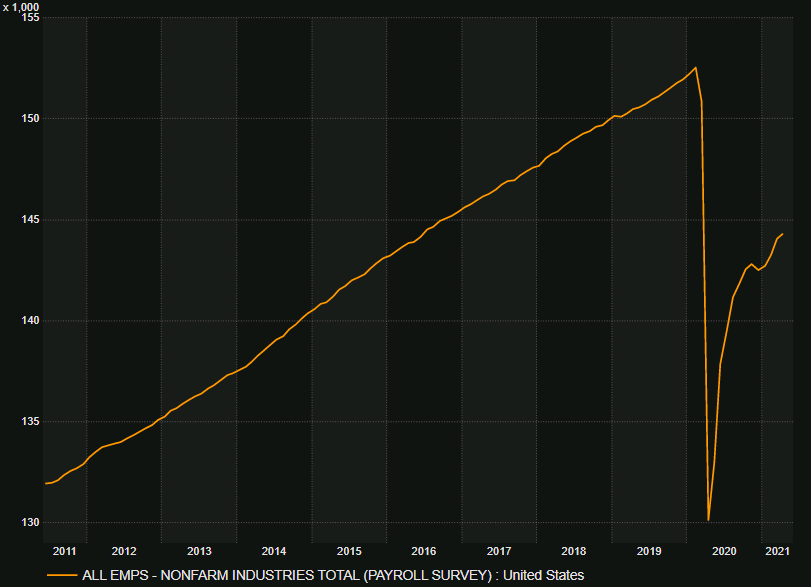 The US dollar made a big move on Thursday after a strong ADP jobs report. That's undoubtedly pushed what markets are expecting above the consensus estimate. We'll look at how much higher after reviewing the data:

Here's the May jobs story so far:

I think the chart above showing total jobs does a better job of telling the story than the monthly change. The Fed wants that gap filled in before it starts hiking and that's an 8-10 million jobs hole. So whether it's 650K this month or 850K that's not going to make a big difference, especially in the context of such a disappointing April number (though watch for revisions).
Markets being markets will overreact to this number. We already got a preview with ADP, though I would argue that the ISM services employment component is a better predictor.
At the moment, some fear of a +1m print is being built in. I sympathize with that view because of the anxiety about tapering and because the range of estimates this month shows some unwarranted complacency.
In the bigger picture though, a weak number would have more implications because it would be the second month in a row and that starts to paint a picture of an economy that's struggling to reopen, and would indicate a longer timeline to fill in the jobs gap.
On the flip side a +1.2m number -- doubling the consensus -- would still leave the two-month average at 700K and that's at the 'easy' time in the reopening. That's hardly the kind of number that would rattle the FOMC doves.
Another thing to watch is seasonal adjustments. According to BMO, the average non-seasonally adjusted number has been 634K above the headline in the past 10 years. Expect to hear plenty of chatter about that after the report even if it's right on the seasonal norm.
Invest in yourself. See our forex education hub.