Is the First Lady distancing the Obamas from the Clintons?

Some of the dirt in the Podesta emails shows that there is no love lost between the Obamas and the Clintons.

No one is quite sure what's going on behind the scenes but there have reportedly been big changes to Michelle Obama's two Twitter accounts today. (Update: These claims are dubious.)

On the account for the First Lady (@FLOTUS), she has reportedly deleted all mentions of Hillary Clinton. On her personal account (@michelleobama) she has deleted every tweet dating back to March 4, 2013.

(Update: This is doing the round bigtime but she simply hasn't used @michelleobama since 2013 and nothing was deleted on @FLOTUS)

Let the conspiracy theories commence. Maybe it's nothing. Maybe something in the leaks angered the Obamas. I'm sure the President is able to make a few calls and find out what was in the Weiner email cache.

So Tim Kaine for President? 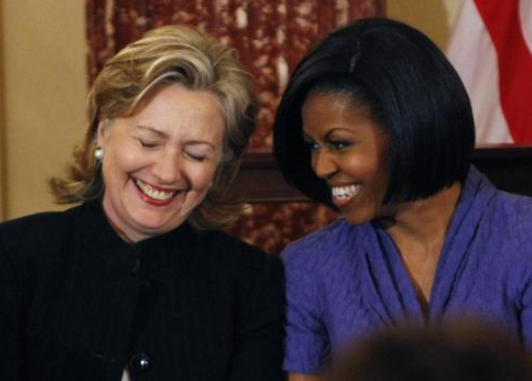 Not so friendly anymore

Update: We'll get to the bottom of this. In the meantime, it's a reminder that it's silly season in US politics and rumors abound.

Update 2: This was a fake report. She hasn't used @michelleobama for years. I apologize. It's a snap decision on whether to report on a potentially market-moving rumour and I got this one wrong. As a trader, I want to know the rumors that are out there, especially if they're getting traction like this one did. We're doing our best to filter out the noise but 6 days before the election there is so much noise.