"Those who think that our red lines will fade as time goes on would do well to forget it. I want to assure the Greek people that there's no way the government will back down on the issue of pension and wage cuts. A deal must be reached but it must be mutually beneficial".

Tsipras will address the standoff in bailout negotiations on the side lines of a meeting of European Union leaders to be held May 21-22 in Riga, Latvia, according to a Greek government official who asked not to be identified as the diplomacy is not public.

Have a great week-end out there everyone 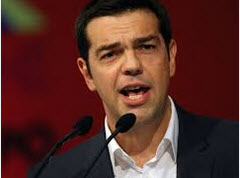