Begun, the basketball war has

This is the barometer of decoupling 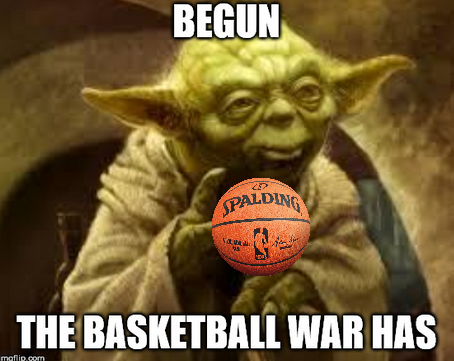 Who could have imagined that a tweet from a basketball executive would be the flashpoint in a decoupling of the US and China.
Here is the crux of the issue: China prioritizes social cohesion above free speech. The US system prioritizes profits.
That creates an impossible axis. When Houston Rockets GM Daryl Morey tweeted an image about standing with Hong Kong it exposed the fault line.

Morey has a right to free speech and to express his opinion. It happens to be an opinion that's popular in the United States.
However it's a dangerous opinion in China and has kicked off a firestorm, including boycotts of the team and the cancellation of pre-season games.
The problem for China is that NBA basketball is popular so cutting off the domestic market is a risk. Or maybe not, according to the editor of the Global Times: 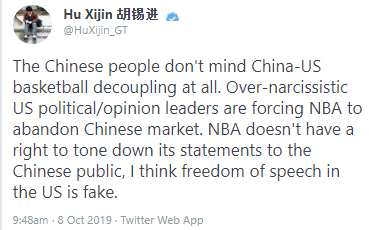 On the US side, you have a tremendous amount of money at stake. For the NBA, China is its second largest market and losing that would deplete a major source of revenue.
However if they kowtow, they risk a backlash at home. The NBA first tried to put the genie back in the bottle by calling Morey's tweet "regrettable" that it had "deeply offended many of our friends and fans in China."  The Chinese statement was altered to call the comment "inappropriate". That angered US fans and now the company has put out a second statement which swung back the other way:
"The NBA will not put itself in a position of regulating what players, employees and team owners say or will not say on these issues," it said.
Ultimately, they are being put in a situation where they have to take sides. This problem is going to come up again and again. NBA players have a right to say what they want and some of them will surely push the envelop.
Eventually, all companies operating in both countries will be put in a situation where they have to take sides. At that point, it becomes a question of who is more willing to compromise its beliefs. Will US businesses censor employees or self-censor in order to maintain profits? Or will China give in because the domestic population wants US products?
I doubt we will get the answer until it gets worse. But eventually, companies will be forced to take the US side on economics alone. At that point, a true decoupling is underway and all the profits that American companies have reaped from China will evaporate.
ForexLive