Everything that's happened in the oil market is wildly misunderstood

WTI above $60. How did we get here and what's coming next 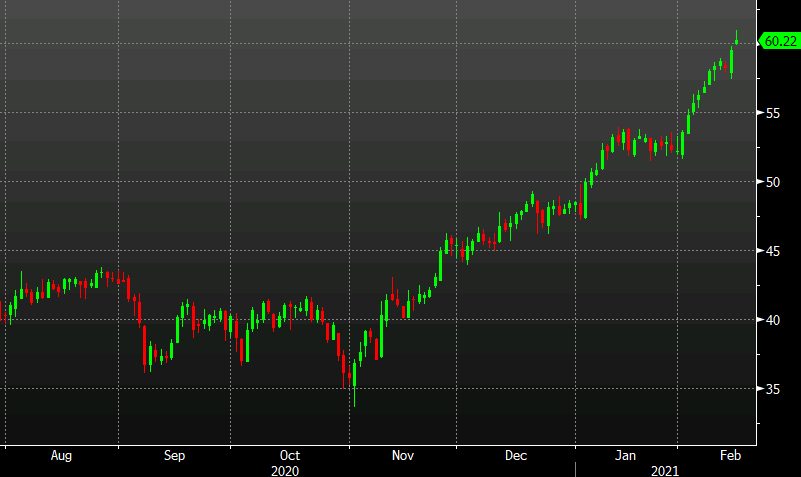 I've been writing about the bullish setup for oil in months but not even the biggest bull could have predicted a return to $60 WTI so quickly.
The return to $35-40 in October was impressive but at those prices, oil companies still weren't making money and OPEC was still deeply unhappy so there was some kind of balance. What's been far more impressive is the run to $60 from $37 on US election night.
It's a tough one to explain. That rally has come even with major lockdowns in much of the consuming world. A big reason is that OPEC held the line in December. It's also because people have learned to live with the pandemic and non-producers are showing some restraint.
In the bigger picture, the oil industry is suddenly starved of capital. Part of that is the shale bust, which is something I've been writing about for two years. The only source of production growth in the world in the past 8 or so years is shale but it was generally a scam. Cheap money flooded in on fanciful projections about $20 breakevens and low decline rates. Even in 2019 at $55-$60 oil, few in the shale were making money. The tide was going out before the pandemic and swamped it afterwards.
Easy money is now everywhere yet no one is offering loans to oil companies unless they have a proven track record of generating free cash flow. Meanwhile, all the money that went into shale killed conventional economics in the rest of the world and investment in long-cycle projects is on life support.
In short, cheap US oil subsidized by naive Wall Street money flooded the world with oil and wrecked the economics of energy in the rest of the world, and eventually ate itself as well. Then the pandemic hit.
The result is a oil bust compounded by a lack of capital or a will to invest anywhere else, lest Wall Street incinerate a few hundred billion more in shale. At the same time, ESG is starving profitable oil companies of capital and compressing multiples.
It was a perfect storm.
What's next?
Oil companies now have no interest in growing production or investing beyond keeping production flat. Occasionally some producer will increase its drilling budget and the share price promptly tumbles -- message received.
So this is all leading to an obvious conclusion that I've been writing about for months: There isn't going to be enough oil.
Now don't get me wrong, an energy transition is coming but there is a huge mismatch in the timelines.
Even Elon Musk on the weekend talked about the important role of fossil fuels with Joe Rogan while advocating for carbon tax.

"By the way, I am actually not in favor of like demonizing the oil and gas industry. Because we can't just like stop instantaneously and not have oil and gas. We'll like die of starvation basically. "We're going to need to burn fossil fuels for a long time, the question is just at what rate do we move to a sustainable energy future?"

This isn't a consensus view yet but it's quickly coming. Two heavyweights in the past week have stepped up and called out the problem.
The first was Goldman Sach's Jeff Currie, who called the bull market in the early 2000s.

"I want to be long oil and hang on for the ride," Currie said in an interview with S&P Global Platts on Feb. 5, warning "there is a lot of upside here."

"Is it back to $150/b? I don't know... as it is a macro repricing we are talking about and everything needs to reprice."

The other is JPMorgan and Marko Kolanovic, who said Friday that oil and commodities appear to be entering a supercycle.

"We believe that the new commodity upswing, and in particular oil up cycle, has started," the JPMorgan analysts said in their note. "The tide on yields and inflation is turning."

"We believe that the last supercycle peaked in 2008 (after 12 years of expansion), bottomed in 2020 (after a 12-year contraction) and that we likely entered an upswing phase of a new commodity supercycle." 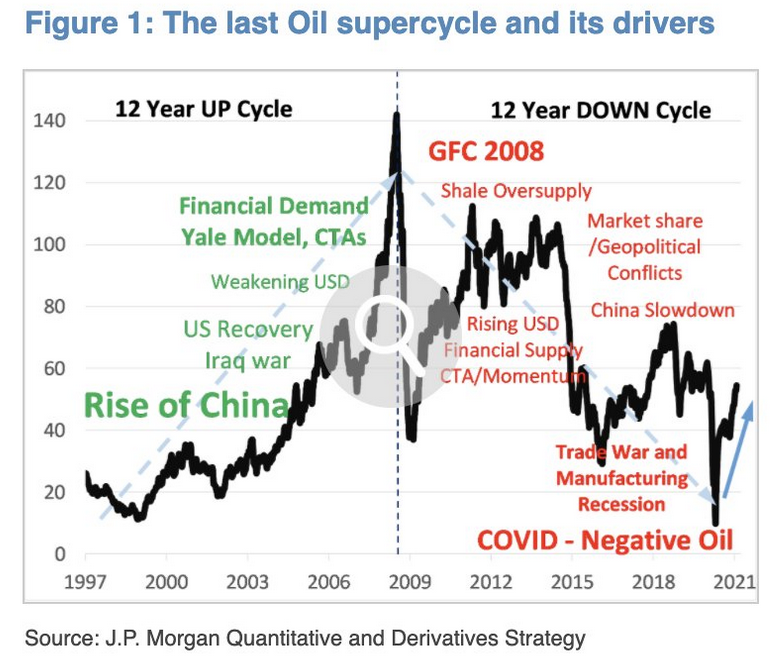 As always, the timing here is key.

I've been in this trade for awhile and everyone hated it. Suddenly though, they love it and are recognizing that oil companies are wildly undervalued.

The problem is that oil demand is still depressed. The speed of this oil rally to $60 doesn't make a lot of sense.

The cold weather in the US is causing a bit of havoc, particularly in natural gas, and people are going to be driving and flying a lot in the year ahead but we're talking about oil for delivery in March at $60.

At the same time, there's nothing technical standing in the way of a return to $65 and even with the Goldman and JPM calls, I don't sense much sudden enthusiasm for crude outside of the oil community. 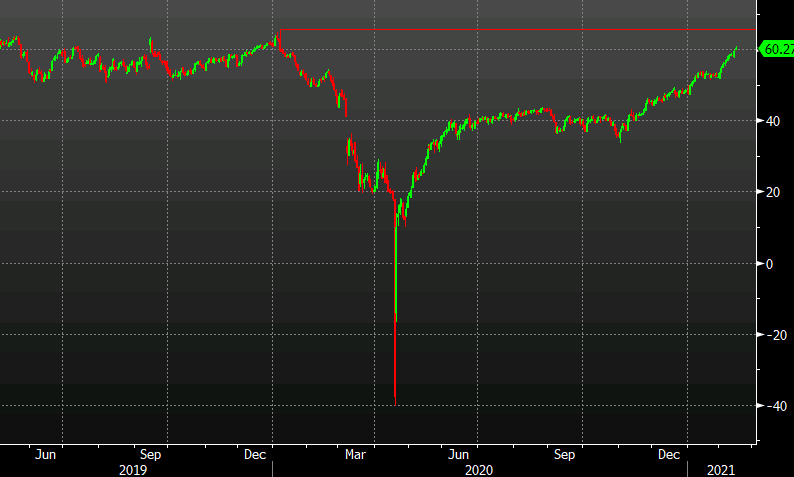 After that, it might be back down to $53-54. The market is going to be scared of OPEC in March. I don't know what they're going to do. Right now they say there are not plans to change course and why would you with the success you've had?
In the bigger picture, they'll eventually bring production back online but in 2-3 years, even OPEC+ pumping flat out with Iran returning to the market won't be enough to offset the combination of declines elsewhere, producer discipline and demand growth.
The trade to make isn't oil itself, it's oil companies, CAD, NOK and RUB.
And right on cue, USD/CAD is threatening the 2021 low. I've been writing about CAD/JPY longs for a couple weeks and that's an even better place to be. 90? 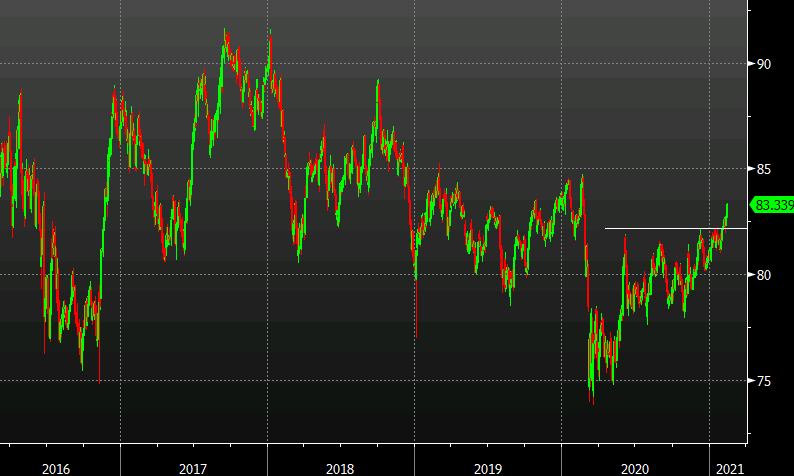