What are all the tourists who would be in Paris and New York doing? Evidently they're trading oil

They're not watching Netflix 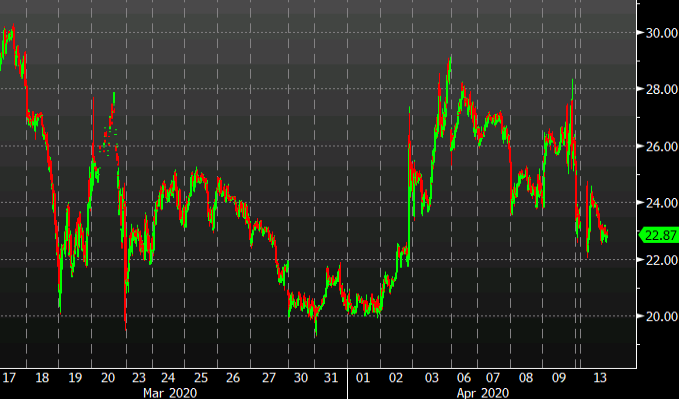 The amount of tourism in the oil market at the moment is shocking to me.
The trading world is full of volatility junkies who rush into any market that's moving. Right now that's oil.
There are some really good reporters and analysts in oil like Amena Bakr from Energy Intel but the amount of interest in what they're writing at the moment is shocking to me. Here's a tweet on a small detail in the negotiations from Friday:

How are there 543 retweets on that?
How did so many people believe that their followers needed to know that tidbit of information. And that's not a aberration. There is tweet after tweet that show a stratospheric jump in interest in the crude oil market.
To me it shows that there are suddenly thousands of new crude oil market traders. I've gotten calls and messages from people crunching different supply numbers and working out formulas about what they mean for price.
It's nonsense.
We're splitting hairs on 115K bpd of supply here while we're looking into a black hole on the demand side. Even the best analysts can only pin down that side of the equation into a 10 million barrel per day range.
On top of that we're wading through the ridiculous OPEC spin about a 20 mbpd cut and all kinds of different timing benchmarks. Ultimately, this stuff will matter but it doesn't right now because we have zero visibility on demand.
It's madness to try and break down the market right now and it's stupidity to believe we're in anything close to balance. Yet even at the best of times we're trading on incomplete information in crude and now people think they can get an edge from OPEC tweets?

What's clear to me is that there is a lot of dumb, speculative money sloshing around in the oil market right now.
That's not necessarily easy to exploit but here's the playbook: People who don't know what they're doing stampede in different directions.
The two trades I saw last week where the break of the wedge on Tuesday and the triple bottom late in the week. 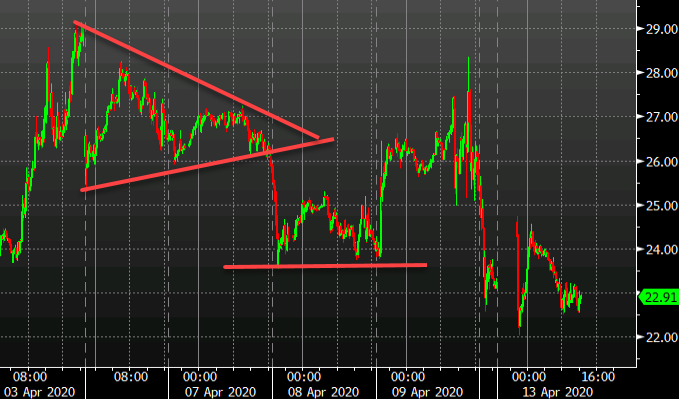 The remedy to overcomplexity and speculative madness is simplicity. Look for it in the chart.
As for right now, go with a break of the narrow range as New York ramps up, but stay nimble and light unless $22.00 breaks.