Crude gives back the latest pop

Oil up 37% from the election-night lows 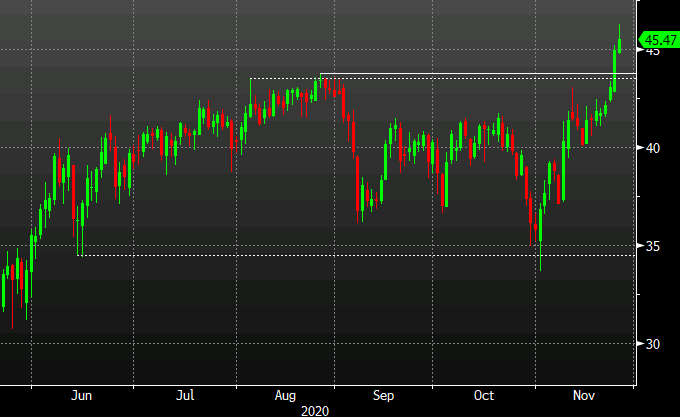 What a turnaround in oil from a month ago. It's up 37% since election night and 12% in a week as it breaks out to the highest since March.
Today's price action though looks like a bit of a short-term blow off. It spiked to $46.26 into the futures close but has quickly given back the tail end of that move in a slide back to $45.59.
The OPEC meeting is a big event for the oil market and it's increasingly tough for me to envision a six-month delay to the taper. Russia sounds like it's on board for 3 months but they will want to maintain some optionality. Other comments today from OPEC officials suggest the latest move is speculative and not based on improving fundamentals.
Ultimately, oil is the most-fundamental market because it's so tough to store and daily volumes are so high. Right now, fewer people are moving around because of the resurgence in the virus and it's going to be a tough winter. At the same time, there is more talk of Chinese stockpiling so there might be real demand out there.
I still think we can see one more flush lower in what would be an epic pain trade but more likely now is that we see a retest of the old range top at $43.80 before another leg higher. I maintain that we're at or near generational lows in crude because investment is so low and supplies are running down.