The Atlanta Fed GDPNow estimate for third-quarter GDP is at 1.2% down from 1.3% last. That is the low watermark for the estimates for the quarter. The high watermark was way up at 6.3% back in August. 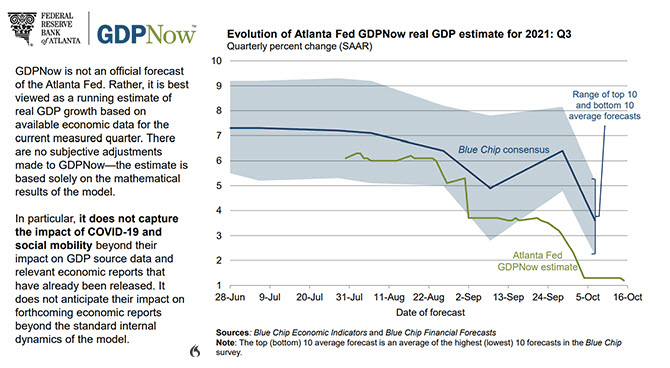 In their own words

The GDPNow model estimate for real GDP growth (seasonally adjusted annual rate) in the third quarter of 2021 is 1.2percent on October 15, down from 1.3 percent on October 8. After this week's releases by the US Bureau of Labor Statistics and the US Census Bureau, the nowcasts of third-quarter real personal consumption expenditures growth and third-quarter real gross private domestic investment growth decreased from 1.0 percent and 10.7 percent, respectively, to 0.9 percent and 10.6 percent, respectively.

The next release will be on October 19
The move to the downside was influenced by: