It was a very subdued range day for major currency forex here in Asia with little data nor impactful news to drive rates. Late reports out of the US of continued record gains in coronavirus cases, hospitalisations, and deaths were once again not a driver.

A minor down move for currencies against the USD coincided with a report that the Trump administration had warned a federally administered retirement plan for railroad workers against investing in Chinese companies, saying additional sanctions could be on the way in return for China's role in spreading the virus. The FX moves on this were minor and soon reversed.

This has left currencies little net changed on the session.

Australian coronavirus new cases dropped to 134 in the previous 24 hours from 191 the day before, a bit of encouragement even as the nation's second largest city is about to locked down again for the next six weeks. This renewed shut in will cause a big hole in the economic recovery path ahead; the Federal government conceded today it would provide further income support for an extended period. The hapless state government that allowed infection numbers to balloon again have announced a formal enquiry into how the mismanagement occurred; too late of course, but at least its something.

Case numbers in Tokyo were above 100 again for another day. In Japan the government is noting many of the new cases are amongst a younger demographic, less susceptible to serious complications than an outbreak amongst older citizens would be - there is no sign of further Japanese restrictions ahead for the time being.

Stocks in China were steady, Shanghai Comp up just a little: 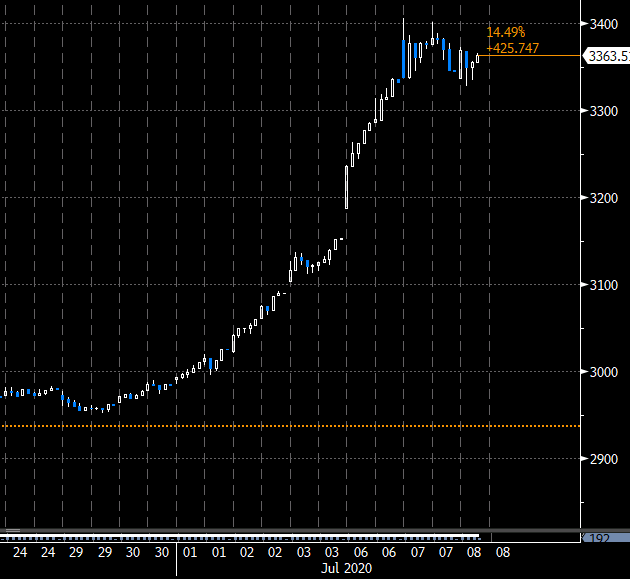