A snapshot of other markets is showing:

Today was supposed to be the US employment day.  It still was but the fireworks were stolen by the jobs data from north of the border in Canada.
In the US, the jobs report showed nonfarm payrolls rose by 148K vs an estimate of 190k.  Prior months were revised lower by -9K. The unemployment rate remained at 4.1%. Wages rose by 0.3% which was as expected, but the prior month was revised lower by 0.1%. Overall the report was a middle of the road number, but with the unemployment rate so low, adding 148K is still a result. The US dollar was mixed.
Now in Canada, the jobs report was much stronger. Recalling that last month, the market was surprised with a net change in employment of 79.5K, this month, that roughly 79K number was matched with another 79K incrrease (well 78.6K to be exact).   Of that, 24K were full time and 55 were part time, but still, it was a pretty impressive results.  Making the report even better is the unemployment rate fell sharply to 5.7% from 5.9% (6.0% estimate).  Overall, an A+ report, and as a result, the market started to price a tightening in for the January 17th meeting. Before the report the expectations were at 45%. soon after the number the odds moved to 68%, and by the end of the day the chances had risen to 82.5%. 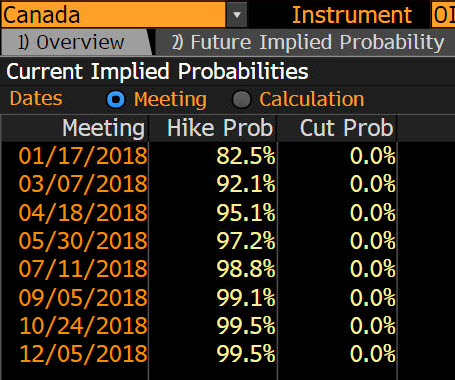 Needless, to say, the loonie shot up - rising against all the major currency pairs.  For the USDCAD the price moved to a low of 1.2354 (from 1.2512 before the report), before rebounding to 1.2413 at the close. That level was a swing level going back to September 28/29 and should be a level of importance in the new trading week.   Stay below is more bearish. Move above, and there could be more correction (up to 1.2450).  I would think, however, that the sellers of the USDCAD look to keep a lid on the pair next week.
In other news today, US factory orders were better than expectations at +1.3% but the ISM Non-manufacturing was weaker (55.9 vs 57.6 expectations).
There were some comments from Fed officials today.  Philadelphia Feds' Harker was a bit more dovish, saying he expected 2 hikes in 2018. That is lower than the 3 projected by the dot plot from December.  Fed's Mester prefers to keep the Fed on the path of a gradual tightening but did not specifically address specifics.
Looking at the snapshot of the gainers and losers in the major currencies, the CAD was the big winner, while the JPY continued to weaken as risk-off fears subsided and took away the flight into the "relative safety of the JPY" (hence the JPYs weakness). 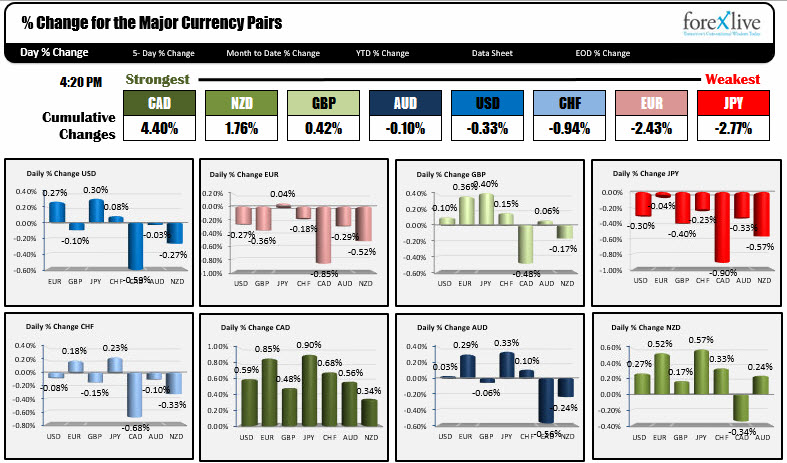