The ISM nonmanufacturing index for June jumped to 57.1 from 45.4 in May. It was also well above the 50.2 estimate. The nature of the index has the potential to show the movements especially when shocks like the coronavirus shut down quickly reverse.  One month businesses are closed. The next month, they are open.  As a result, the rebound is not all surprising.
Looking at the components however, the one red flag comes from the employment component which remains in the contraction side despite the sharp increase from 31.8 to 43.1.  If employment remains depressed/contractionary (i.e. more more states close down restaurants, bar, theaters, etc.), it could have a negative impact on the other components.  Below are the impressive changes seen in June.
The CDC reported reported 44,361 new cases which was slightly higher than the number yesterday (around 43,000). The bright spot is the death numbers remain low at 235. The focus over the next few weeks will be on that death toll. If it increases dramatically as a result of the rise of new cases, that would be trouble.
The USD was vying with the JPY as the weakest of the major currencies at the start of the North American session.  At the end of the day, it was the weakest although it did gain marginally in the session as some shorts took profits.
The EUR was the strongest of the majors. It was the strongest at the start of the NY session but weakened in the NY session (also saw modest profit taking). 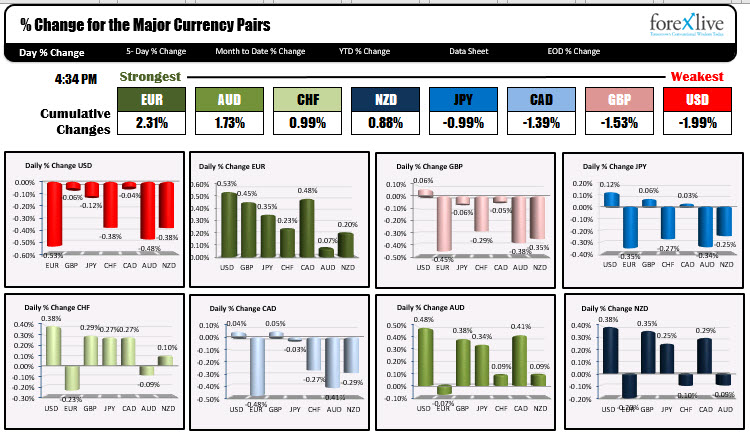 Although the US dollar was weaker across the board, the declines were mixed with the GBPUSD, USDJPY and USDCAD little changed.  The USD declined the most vs. the EUR at -0.55%. The AUD and NZD gained nicely vs the greenback as "risk on" flows helped those currencies.
Helping the "risk on" flows was sharply higher stocks. The NASDAQ index led the way with a 2.21% gain. The NASDAQ also closed at record levels and has it been up for 5 consecutive days (as has the S&P index). The Dow industrial average rose by 1.78% and close at its session highs. The S&P moved up 1.59% and is within 1.58% of the unchanged level for the year.
European shares also advanced with the UK FTSE leading the way at +2.09% followed by Spain's Ibex at 2.06%.

In the US debt market, yields closed marginally higher and near the low yield for the day. The 2 – 10 year spread was nearly unchanged on the day.

A technical look at some of the major currency pairs shows: