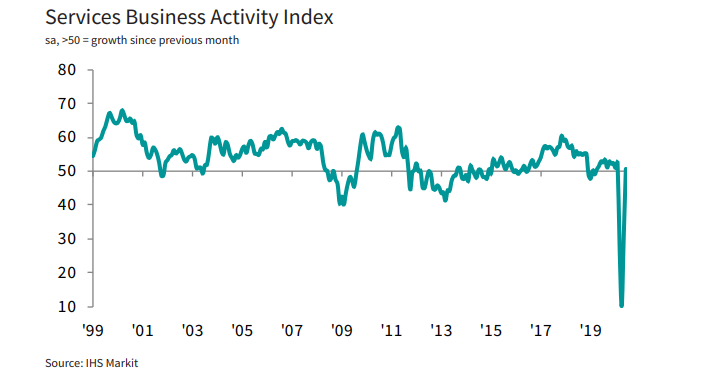 The preliminary report can be found here. A slight improvement relative to initial estimates but it doesn't change much of the narrative.
The French economy bounced back quite decently following the end of lockdown measures but is still seeing overall conditions below pre-virus levels. We'll have to see if the recovery can keep at such pace in the coming months/quarters.
For bank trade ideas, check out eFX Plus
Markit notes that:

"Following the easing of lockdown restrictions in May and early-June, businesses have had the opportunity to begin ramping up operations, and that was reflected by a renewed expansion in private sector activity at the end of the second quarter. Although the recovery was predominantly driven by manufacturers, service providers also posted an expansion in activity. That said, sub-sector data showed that services firms that are reliant on face-to-face interactions, such as Hotels & Restaurants, continued to suffer.

"Meanwhile, demand conditions deteriorated further, driven by a solid reduction in the service sector. However, the downward trajectory continued to flatten and if France can avoid a large scale second outbreak, we can expect new business to stabilise in the months ahead."