The change in China that could suffocate the global economy

People in Beijing don’t wake up and check the daily weather forecast; they check the air pollution index so they know what face mask to wear. 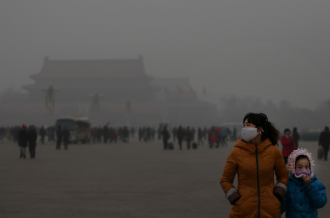 This shocking series of pictures were taken on a ‘clear’ day. The air is described as a noxious soup. Blow your nose and it’s black.

The problem didn’t happen overnight but air pollution indexes are up 30% in 2013, and that’s if you believe the government numbers.

Chinese officials are trying to curb pollution without hurting economic growth but those goals may be incompatible.

Change could come any day. Chinese politicians live in Beijing and their children are breathing the same air and getting sick. An unusual weather pattern could hit Beijing and cause a spike in pollution that sends hundreds of thousands of people to hospitals. That could be the tipping point for radical change and the consequences for the global economy are impossible to predict.

Bloomberg should add Chinese air pollution indexes to their tickers. Today’s readings aren’t high but half the day was still worse than living in an airport smoking lounge.

The prevailing winds from China blow toward the Pacific ocean but occasionally they shift Northward and Japan and Korea are covered by smog, and they’re increasingly unhappy. If a 10,000km ocean buffer didn’t separate California from China, the United States would never tolerate being poisoned by the people taking their jobs.