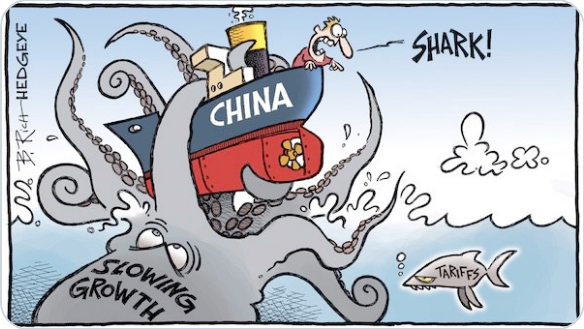 This great cartoon from Hedgeye captures everything that's happening today.
The mode in markets for 2019 has been to buy risk when trade talks were going well and to sell it when there was a stumble; but today's trade is a first sign of something different. Fears about slowing growth are dominating. Two headlines stand out:
This was expected and some of the details weren't so bleak but Merkel refuses to abandon austerity and it may now be too late to avoid a recession that could also swallow the rest of the continent.
This was the weakest reading since Feb 2002 and was coupled with soft retail sales data. China has been the economic engine of the world since the financial crisis and a stumble for whatever reason is going to stifle global growth.
The market reaction to both of those wasn't immediate but bids built up in bonds and US 2s10s inverted with the UK doing the same. It's quickly turned into a full-on flight to safety. The 30-year yields is now flirting with 3% as well.