Much like the US we've seen strong employment gains over the last couple of years. There's signs of tightening in certain sectors like construction, and wages have been on the up. Unemployment is at the lowest since before the financial crisis

Wages are where the main story is now and despite talk in the UK that pay is only moderate, we're currently at levels about half of where we were before the crisis, and still maintaining an upward trend. Wages could always be better of course but they lag in most recoveries and things are certainly better now than then were 2 years ago

From around this month we might see wages being a bit more erratic due to new wages being introduced. The UK has a benchmark minimum wage called the Living Wage. It's calculated by the Living Wage Foundation campaign group. It's separate from the governments Nation Living Wage, which is a minimum requirement for firms to pay. The Living Wage is not legally binding but many firms have been using this benchmark in wage pricing with some even going higher in various locations, particularly supermarkets and other retail firms

A good many of those increased their wages in October and so there's a fair chance that we see this reflected in the wage data. Here's a list from The Guardian of what the supermarkets are up to; 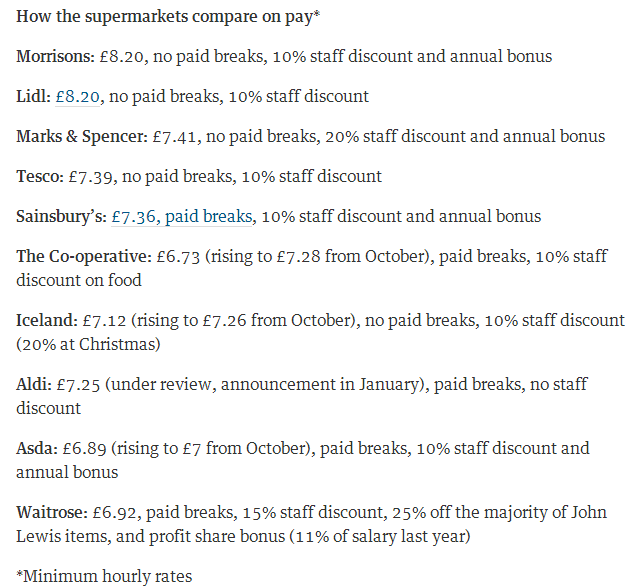 Some of the rises aren't huge in percentage terms but there's other factors to consider within the methodology of the data which means these rises could play out in the earnings numbers. For that, earnings are expected in at 2.5% tomorrow, down from the 3.0% gain last month

If there's one big caveat to seeing these supermarket headlines boasting of bumper wage rises, it's the untold story of whether they are nicking money off another part of staff benefits. Morrisons, for example will be increasing minimum pay but will stop paying extra for Sunday hours and for breaks. Give with the right hand, take with the left

The long and short is that there's a possibility that the wage numbers will come in higher than expected due to the factors I've detailed above. But of course, this is only one snapshot of the UK labour market, and one that has made noises in public

For the report overall, given that we've seen signs that the falls in the claimant count has started to flatten, it looks like the pace of jobs growth could be slowing. That's another good sign for wages IF it means the labour market is tightening, rather than firms are scaling back on hiring

Given the focus on the dollar now, a good report might tempt GBPUSD sellers into some choice pickings on any decent bounces, while a poor report will pour more fuel on the fires of those pushing back rate hikes