Preview: September non-farm payrolls likely to be the last strong month for awhile

This may be the last of the 'easy' recovery

The v-shaped portion of the economic recovery is likely over. All the businesses that can reopen safely have likely done so. Government benefits are now expiring and the virus is likely to re-accelerate as cold-and-flu season picks up.
The consensus for Friday's non-farm payrolls report is currently +850K after 1371K jobs were added in August.Estimates range from -100K to +1800K but they will change after Wednesday's ADP report and as real-time data arrives. Another drag is the census; hiring boosted prior reports but now it's a drag and Calculated Risk highlights a likely decrease of 41,403 jobs in the non-farm payrolls data.
One report that's less optimistic is from Homebase, which is a work scheduling app that's mostly used in the service sector. They note that their metrics of jobs fell in Sept for the first time in six months. 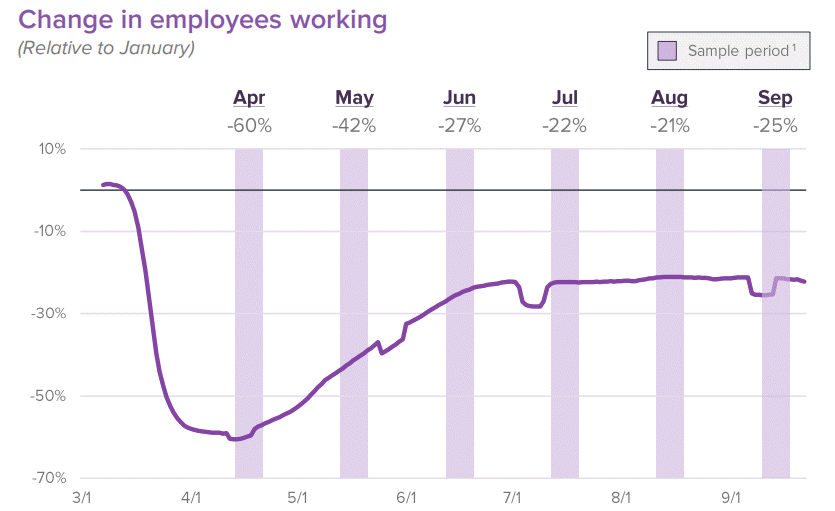 Some of that is seasonal and it's likely to be adjusted out by the BLS. However Homebase notes that October is likely to be tough; something JPMorgan also hints at:

So far the economy has recovered 10.6mil or 48% of the 22.1 mil jobs lost in the pandemic and this Friday's jobs report could add close to a million jobs to the recovery total. But thereafter the jobs recovery is likely to slow, with the layoff of some 247,000 remaining temporary census workers, the scheduled furlough of thousands of airline workers on October 1st, below average seasonal hiring at retailers, the layoff of restaurant workers as outdoor dining becomes more difficult to sustain, and potential state & local government layoffs.

This is the last jobs report before the US election, so look for plenty of spin but don't expect that to affect the market. In general, I don't think there is a big scope for a market move on this report.