The Atlanta Fed GDPNow estimate for fourth-quarter GDP growth fell to 2.7% from 3.2% in a earlier estimate this week.
In their words:
"The GDPNow model forecast for real GDP growth (seasonally adjusted annual rate) in the fourth quarter of 2017 is 2.7 percent on January 5, down from 3.2 percent on January 3. The forecasts of real consumer spending growth and real private fixed-investment growth decreased from 3.2 percent and 8.9 percent, respectively, to 3.0 percent and 7.6 percent, respectively, after this morning's employment report from the U.S. Bureau of Labor Statistics and this morning's Non-Manufacturing ISM Report On Business from the Institute for Supply Management. The model's estimate of the dynamic factor for December-normalized to have mean 0 and standard deviation 1 and used to forecast the yet-to-be released monthly GDP source data-fell from 1.44 to 0.37 after the reports."
The next release will be on January 10th. 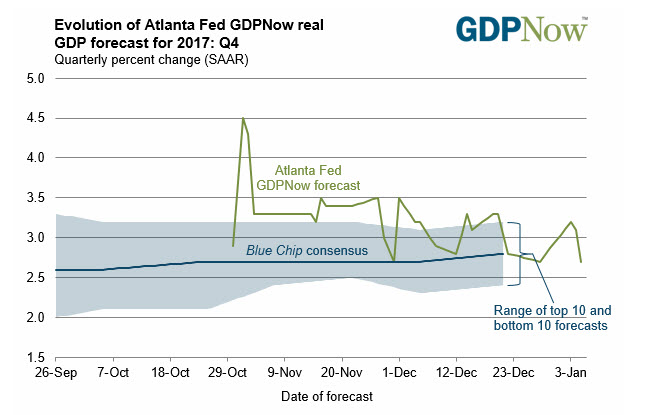