Canada's Freeland - Nafta talks continue Thursday in Washington, she won't be there

Huh, negative or positive for Nafta? … I'm going with positive. Dunno though. Maybe she would be there if a deal was reached …. good for publicity and she is a politician
Oh dear … yeah tomorrow is Friday and we will get the usual hullabalkloo about a deal …. we've had it for the past few Fridays and I, for one, am wise to this b/s …. roll on next week
posting this again … 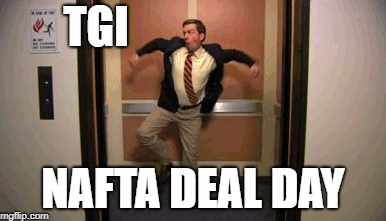