CDC confirms that traveler from China diagnosed with coronavirus in Seattle

First US case appears on the west coast

The CDC has confirmed the earlier report from CNN and added some detail. They say a traveler from China has been diagnosed with the coronavirus.
All things considered, it would be worse if the patient had no contact with China because it would indicate another vector. However we also have to assume that the patient was on an airplane with at least 100 other people, and airplanes are like a petri dish.
Coronavirus patients have been identified in at least four Chinese cities, as well as Taiwan, Japan, Thailand, South Korea and the US.
A 2004 paper argued that SARS lowered Chinese 2003 GDP by 1-2 percentage points.
This separate paper also argued for something around that level:

China, with 5,327 confirmed cases as of September 26; Hong Kong with 1,755, and Taiwan with 346.2 With patient numbers and toll rates growing, SARS cast a shadow over the economic prospects of Asia. Estimations made by the Asian Development Bank (ADB) in early May showed that GDP growth in East and Southeast Asian economies would be reduced by about 0.2-1.8 percentage points assuming the disease's impacts did not run into the third quarter of 2003.3 Recent Reports from ADB stated that the cost of SARS was around $59 billion for the Asia and Pacific region, while that for China and Hong Kong amounted to $17.9 billion and $12 billion respectively.

Others pegged it at around 1%.

During SARS, it was very obvious to see the status of Beijing which became a ghost city. We all know that Beijing has traffic jams every day, but [then] you worried whether you were speeding. It's never been seen before.

Here is a table from the National Center for Biotechnology Information estimating economic impacts: 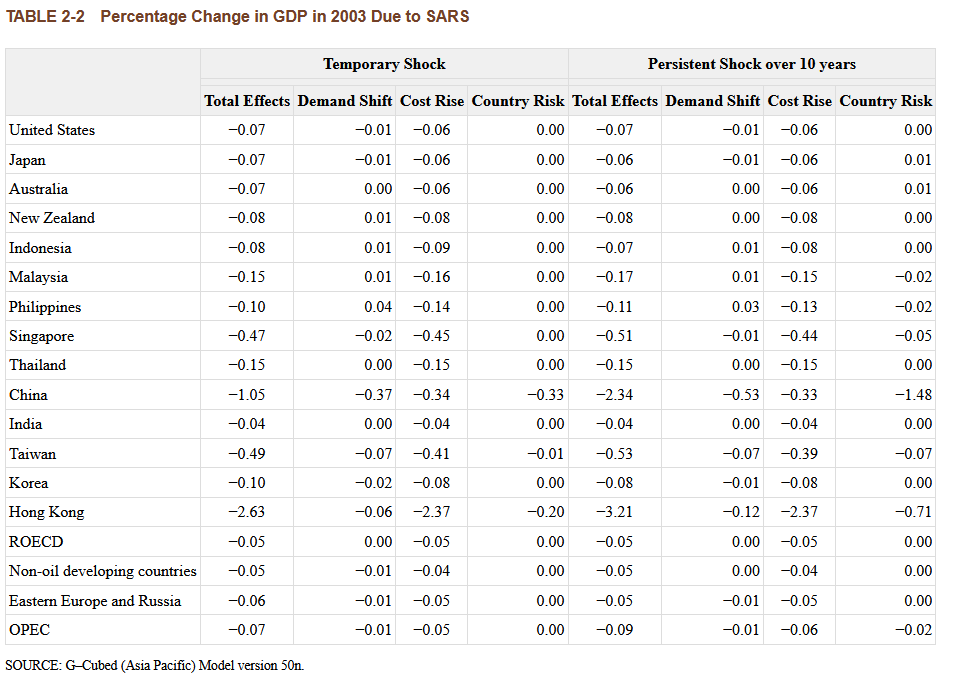