China's Caixin PMI for May came in at 51,2, well above the consensus market expectation of 50.5 and April's reading of 50.7. Other Asian Markit PMIs were similarly more promising. These indications of rebound in the region's manufacturing sentiment are encouraging but there is a ways to go. The situation unfolding in the UIS with reimposition of shut downs is going to weigh on global demand and thus Asian producers.

Japan's PMI showed improvement also, but the quarterly Tankan report from the Bank of Japan was a disappointment, marking another consecutive decline in many of the measures.

USD/JPY has been a mover on the session, with no obvious catalyst from news nor data - if anything the continuing run of less than stellar data should argue for a weaker yen as aggressive BOJ easing will go on and on. But, after a move to highs just over 108.15, USD/JPY dropped nearly half a big figure as sellers emerged and the buying interest evident during the US session dried up somewhat.

Currencies elsewhere managed to add small gains against the USD, but ranges were small. Again, while there was plenty of data and news none if it provides an obvious catalyst for the moves. Perhaps it was the improved PMIs but that is pretty thin. 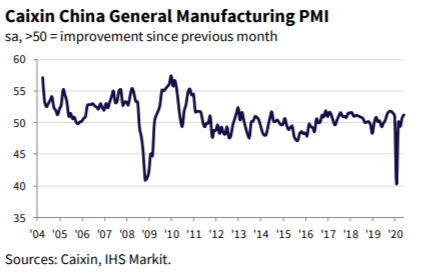