After the debacle called a Presidential Election Debate last night, it seemed that the Dems, and GOP woke up from the nightmare with ideas of potentially reaching some sort of agreement on a new stimulus deal.  After all the threat of voting everyone out come November was seeming like a good idea by the American people.

Also helping the "Deal on" sentiment, was news that Disney, Continental, Shell, Marathon Petroleum and Dow Chemical were looking toward cutting jobs. Of course, there are the airlines as well who are sitting on a knifes edge wondering if there will be more bailout funds before they give up on their employees as well.  Oh....did I mention small to mid-sized companies which are about to throw in the towel as the reopening sputters and fears of a 2nd wave (or is it still the first wave) grows.

All that had Treasury Secretary Mnuchin saying he was going to give it "one more try" for a new stimulus deal.  House Majority Leader Pelosi was also hopeful.  White House's Meadows said "he's seen substantial movement on a stimulus deal".

As a result, stocks moved higher, the dollar started to move lower, gold prices moved higher as did yields on treasuries and crude oil futures. The risk on flows were flourishing in all markets.

Finally, if all that wasn't enough, there seemed to be some month-end/quarter-end dollar selling in the hour leading to and through the London fixing (at 11 AM ET). In that hour or so into the fixing and just after it:
The other currencies vs the USD saw gains as well (dollar selling).
However, things started to turn the other way after Senator McConnell warned before the meeting that House Majority Leader Pelosi's latest aid bill had "poison pills".  Later a couple headlines, one saying Moderna said it's vaccine won't be ready before the US elections, and the other saying Republicans and Democrats are still far apart on a virus relief bill.  Whoops.
The risk on flows saw some reversals of the earlier moves and market started to reprice a no deal.
As the dust settled into the close, the USD is still ending the session lower for the most part (it did rise vs the EUR and the CHF), but it was also off the lows for the day.
The snap shot of the winners and losers shows the CAD and AUD were the strongest, while the CHF and the EUR were the weakest. 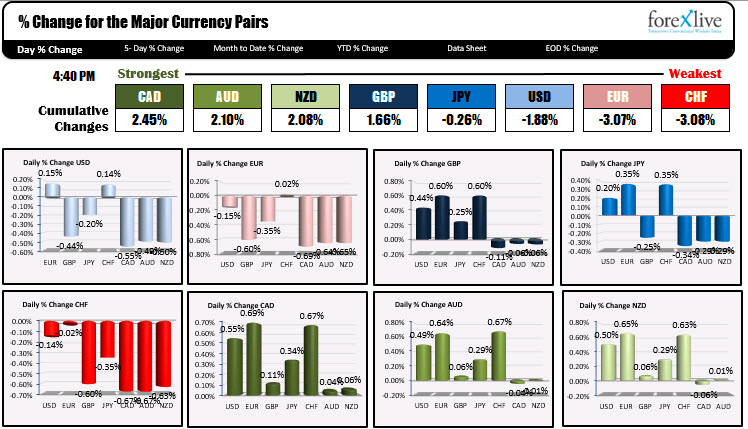 In the US stock market, all the indices closed higher but well off there highs for the day. European shares ended mostly lower.

In other markets,
Tomorrow is another day with hopes for some sort of compromise/agreement. However, the clock is ticking down. With employment report due on Friday and expected to show another decent gain of about 800,000 to 900,000, one has to wonder if that might be the last of the good numbers if additional stimulus is not provided to those businesses in need.