The whippy moves in markets were especially evident this week

2015 will go down as the year when all of the Fed, ECB, BOJ and SNB hit an inflection point in their willingness to distort and manipulate markets, notes Deutsche Bank.

"This mix of overt and subtle withdrawal of market support is a key macro driver of recent increased volatility," Deutsche Bank adds.

#1: "The SNB capitulation in supporting the EUR/CHF floor generated one of the largest intra-day swings in a G10 currency since the fall of Bretton Woods. Currency markets have a long and storied history of being manipulated by the authorities through a variety of FX regimes, so the collapse of the EUR/CHF floor was far from unique," Deutsche Bank clarifies. 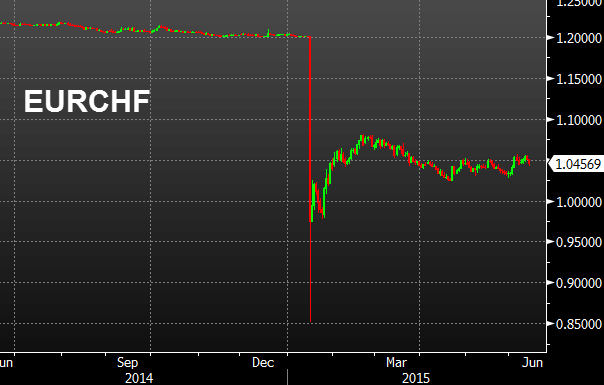 #2: "The ECB did learn something from the SNB. Having driven longend core 10y yields close to zero, the ECB has shown it is prepared to accept a retracement in bond yields, and increased market volatility," Deutsche Bank adds.

#3: "The yen has weakened by over 50% versus the USD since the USD/JPY lows, helped by BOJ QE. As USD/JPY recently broke above Y125 as derivative (short vol) 'range' plays were stopped out. BOJ's Kuroda (and before that Finance Minister Aso) have shown no appetite to build on yen weakness...DB's marginally stronger USD/JPY scenario to Y130 next year relies on US rates, and not the Japan side of the equation," Deutsche Bank says.

#4: "The Fed tightening cycles have historically led asset/equity vol by 18 - 24 months. This long lead time has been dramatically truncated both by the unique features of reduced QE representing a perceived tightening, and because there is more sensitivity to rate expectations, now that rates have been unusually low for an unusually long time," Deutsche Bank notes.

""In sum, 2015 will go down as the year when major Central Banks hit an inflection point in their willingness to distort and manipulate markets. Central Banks are more accepting of volatility now in the hope that this might reduce volatility in the future. This is perhaps true, but the G3 actions to reduce their market distortions need to be placed in the broader context of Global Central Bank stimulus," Deutsche Bank concludes.

For trade recommendations from banks, check out eFX Plus.