The coming debt and population problem

Debt levels are set to rise to unprecedented levels. According to the International Monetary Fund in June the public debt, as a share of GDP in advanced economies, is set to come in at over 130% for this year and next. To put that into perspective that surpasses the debt levels from the second world war.If you look at the chart below you can see that the double whammy of the Global Financial Crisis, followed by the present pandemic is pushing debt to record levels. 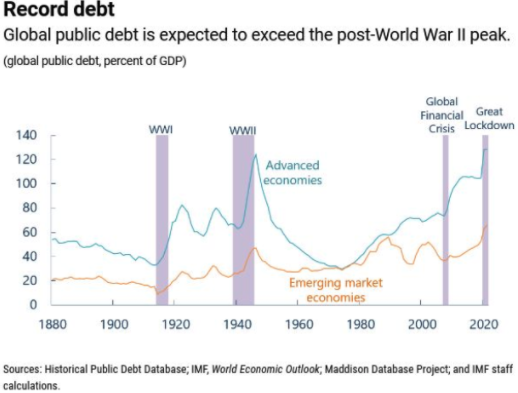 The general thinking now is that the present crisis is a one in a hundred years kind of event (what if it isn't) and that future generations will be able to claw back the debt levels over time. However, a publication from the Lancet in the UK suggests that there is a falling population that could fall by 9% at the end of the century. So, this means that there will be a large decline in numbers of working age adults. There are some countries which are projected to be particularly badly hit. Japan, Spain, Portugal, and Thailand are expected to see their populations halve by the end of the century. The countries which are projected to see 25% population declines are also projected to see a higher ration of older to younger people. So, more of this debt is going to be shouldered by fewer as an ageing population raises further spending considerations.

What will happen next?

There will be moves by governments to start to cap this debt problem. It will not be allowed to continue unless we get into worst disasters than we presently are in. The main concern is that of default. As long as willingness to repay remains, then the debt pile can be reduced. The main risk is if the debt becomes too great and the easiest solution is to just walk away...