Commodity bulls have been searching for a market to corner and now they've found the perfect target: Uranium 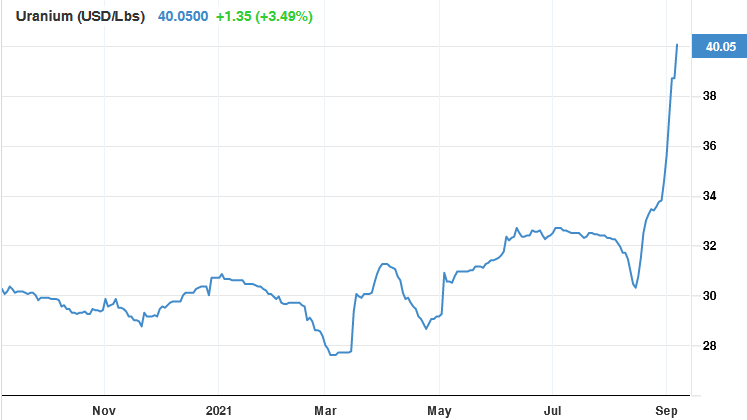 For commodity bulls, uranium is the next big thing. If you think crypto and silver bugs are wild, wade into the uranium-sphere. It's a growing community with a GameStop type of feeling to it.
At the core of it -- like most viral ideas -- is a kernel of truth. If there is an existential climate emergency, then nuclear power is the obvious solution. If we're 50-100 years away from a climate collapse, why worry about nuclear waste when we have a readily available source of zero emissions electricity?
The commodity itself has two uses: Weapons and power. With weapons demand largely tapped out, it's all about power.
On the supply side, it's a very simple balance: The uranium demands of a nuclear power plant can be mapped out years in advance. It's essentially a math problem to line up supply and demand.
Every once in awhile though, there's a shock. The Fukushima disaster and subsequent Japanese nuclear shutdowns left a gaping supply overhang and the market has been slow to recover as Chinese plants come online and mines are idled.
The bull case is that prices aren't high enough to incentivize new mines, which will eventually lead to under-supply. That may be the case, but we're not there now, especially after the world's top uranium miner -- Cameco -- idled the world's biggest mine in 2018.
"There is plenty of idle tier-one production and tier-one expansion capabilities, as well as idle tier-two production and expansion capabilities," Cameco said in 2019.
Others though argue there is a severe imbalance brewing in the market. This is from Yellow Cake, which is a London-listed physical uranium holder: 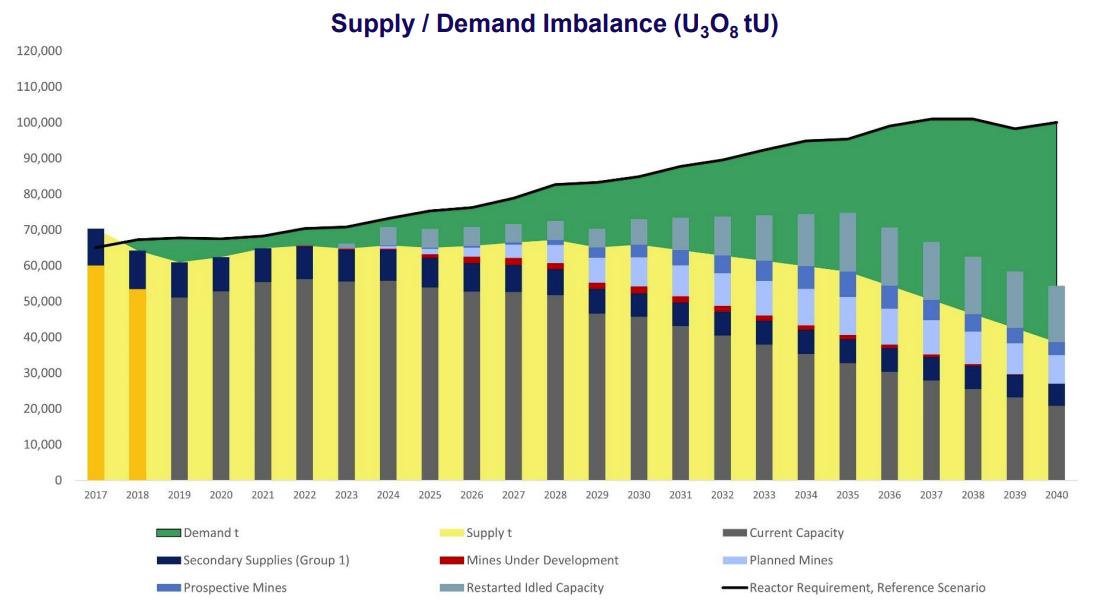 In other ways though, the fundamentals are deteriorating. The latest polls show Taro Kono is increasingly likely to be the next leader of Japan. He supports a total phasing out nuclear power by 2050 -- something that led to a surge in Japanese green energy stocks this week.
Enter Sprott
Mine shutdowns and political talk hasn't convinced uranium bulls they've made a mistake. Instead, they're piling in and shares of uranium miners are soaring alongside the price of the commodity.
Why?
Sprott Asset Management took over a little-known physical uranium holding corporation, turned it into a trust and made plans to list it on the New York Stock Exchange. That's still in progress but it listed on the Toronto Stock Exchange in late July and the response has been overwhelming.
The key is that it actually buys the uranium. When flows come in, the trust goes into the spot market and buys uranium. Due to inflows, the trust now holds 24 million pounds of uranium, up from 16 million before the conversion.
More is being added by the day as the price of uranium rallies due to the hype and money coming in. It's a feedback loop fueled by WallStreetBets and its own communities, which are dedicated to a squeeze. 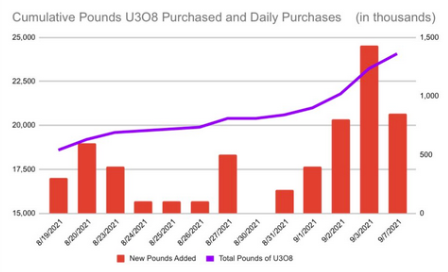 charts via @theAlexW
In just two weeks, the trust has single-handedly pushed the price of uranium up 30% to a seven-year high of $40/pound. 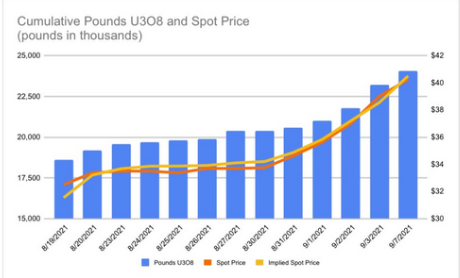 To put the demand into perspective, the 6 million pounds purchased in the past two weeks is enough to power about 13 typical 1 gigawatt reactors, for an entire year. That's enough fuel to power around 9 million homes for a year.
Because uranium is such a thin and finely-balanced market, the emergence of a price-indescretionary buyer is overwhelming. The company is subtly cheering on the squeeze. 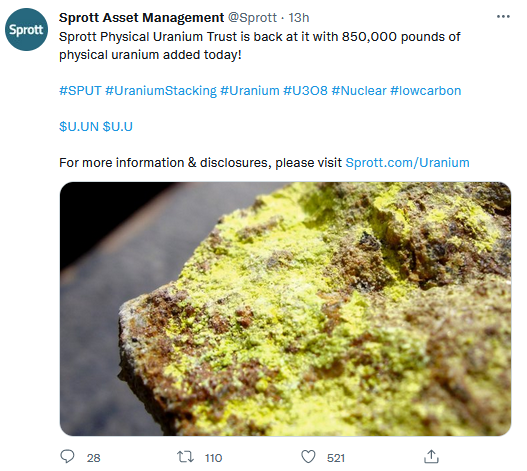 How does this end?
I'd argue it's very early innings as the trust is only a few weeks old and an NYSE listing is still on the horizon. There's certainly some hype building but there could be much more.
So far, about $400m has flowed into the Sprott trust. For some perspective, the market cap of meme-stock favorite GME is $14 billion. Even a fraction of that could send uranium spot prices parabolically higher. That kind of squeeze will make life difficult for power plants and begs for a regulatory response but given the woeful pace of regulators, it won't even be on their radar for months. Moreover, uranium costs are a small part of the overall cost of running a nuclear power plant and miners would argue that under $40/lb they're unfairly subsidizing the plants.
In the meantime, the runs in the ETF (U.TO and SRUUF- OTCre) along with uranium miners could just be getting started. Looking at the long-term price of uranium, the 30% recent rally is barely discernible. 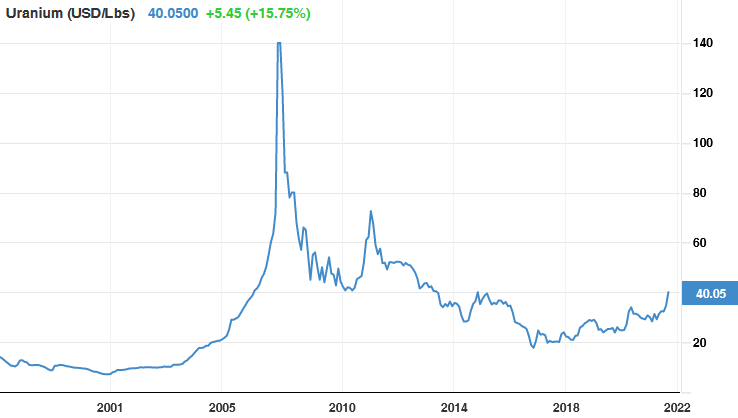 A risk is that they run out of inflows or fail to match the supply of mine output. But so long as nuclear power plants pick up the deficit, the balance should tilt prices upwards. For now though, it's a virtuous cycle of price rises and more money piling in -- a classic feeding frenzy.
Sprott uranium trust: 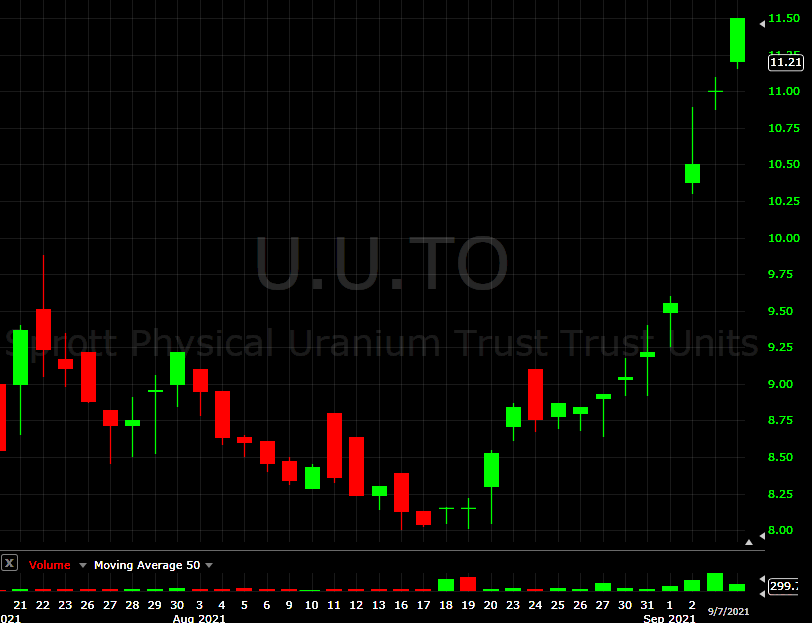 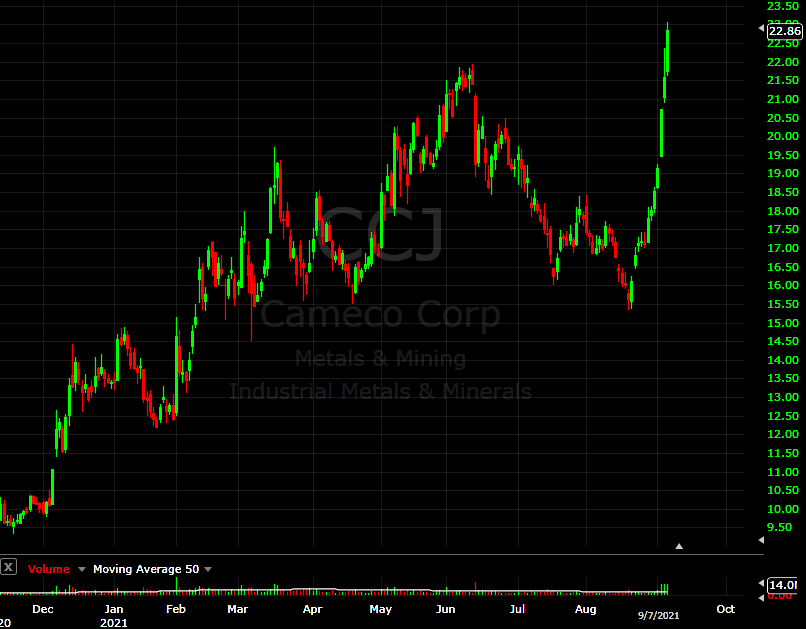