All sides of the space aren't attracting enough capital 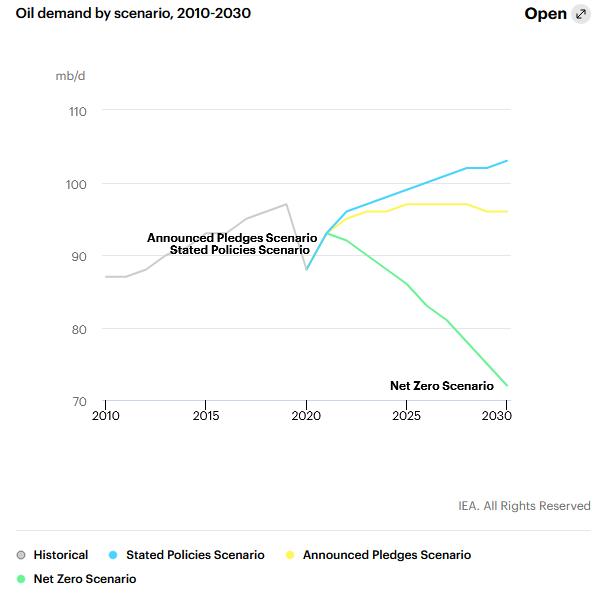 The future has never been less clear in the energy space and that's leading to potentially ruinous outcomes.
The IEA outllines in a report today that there isn't enough money going into green energy to deal with climate change and there isn't enough money going into fossil fuel investment to meet demand.
The energy crisis in much of the world right now speaks to both of those problems and in time it should worsen.
"In recent years, investment in oil and gas supply has often appeared to be geared toward a world of stagnant or even falling demand, while purchases of internal combustion engine vehicles and expansion of natural gas infrastructure point the other way: toward ever-increasing oil and gas consumption," said Fatih Birol, the head of the IEA today.
Russian President Putin today said oil prices could go to $100 per barrel. Given the lack of investment in the space, I'm starting to think that's what's needed just to keep the lights on a few years from now.
On the green side, there will be a massive need for more electricity generation with backups tied to nuclear and/or natural gas in the coming years. There's no sign of the planning or development needed to get there and the recent episodes in Europe and China don't inspire much confidence in politicians to manage it.
The IEA says spending on sustainable energy is only about one-third of what's needed.
The message from the report is that either massive investments in low emissions technology or significantly larger investments in fossil fuels are needed. If not, we won't have enough energy.
We're investing in oil as if net zero is inevitable but we're not investing nearly enough in green energy to get to net zero.
In a sense though, you can see why. No one knows which horse to bet on because there's so much innovation and high hopes for technology. No one wants to dump money into solar or nuclear only to see a new technology displace it. No one wants to make long-cycle investments in oil because demand could crater in a decade. It's a conundrum and that's why I think we're going to be dealing with energy insecurity for many years.

By design, the scenarios in this Outlook describe smooth, orderly processes of change. In practice, however, energy transitions can be volatile and disjointed affairs, characterised by competing interests and stop-go policies. As the world makes its much-needed way towards net zero emissions, there is an ever-present risk of mismatches between energy supply and demand as a result of a lack of appropriate investment signals, insufficient technological progress, poorly designed policies or bottlenecks arising from a lack of infrastructure.

I think the smart bet right now -- or at least the place where governments are about to throw major money -- is in carbon capture and underground storage. The IEA highlights that it's a necessary step on the path to net zero.
Yet the environmental lobby hates it because it's backed by big industry and won't require wholesale changes in how we live. I worry they're going to destroy it the way they wrecked nuclear power in the 1980s, and with similar consequences.