What surprises will Draghi have in his box of tricks today?

As we've entered panto season, it's time to find out what type of show Draghi is going to put on

The consensus from the banks is pretty uniformed. A 6-9 month extension, and QE remaining at €80bn. If we get that then the market would have pretty much hit the nail on the head. The euro may drop on the confirmed 'pedal to the metal' but we've seen often enough that the expected reaction doesn't last, as far as central banks go.

The real question is what Draghi might do differently? The euro is a big part of the ECB's plan, no matter what they say about it not being a target. It was one of the reasons why they wanted to fight deflation, which you'll remember when he highlighted how much damage the strong euro did to CPI, when it was trading up to 1.40.

At some point the euro will go higher if inflation gets near to 2.0%. There will be no fighting that as that will be when the ECB start to change course on easing. However, Draghi will want to squeeze as much as he can out of it while it's this low.

For what it's worth, I'm still sticking to the ECB extending QE for longer than expected but at a lower rate. It was actually Barclays that first touted that idea a few months ago so I'm surprised they've changed their view, as detailed in Mike's post.

Lower for longer gives the ECB the best room to manoeuvre down the line. They offset the lower purchases by saying they'll do more of them. The time limit they set wouldn't matter anyway as they could cut it short at anytime. It also gives them the room to continue should inflation not continue higher, otherwise they are going to have to make another decision 4-5 months down the line. Even if they don't think they'll reach their end date before they need to taper, because they think inflation will rise to near target, they're not going to tell us that, and keeping a long end date gives them that room. I just don't think Draghi wants to be that short-termist in having to tack on extension after extension. He'd rather kick the can once than often.

That's just my view overall but there are other factors that might be pulled from the hat. Changing the scope of purchases, increasing or decreasing amounts between corp and sov bonds, changing collateral rules, moving more towards the long-term financing operations, there's a hundred and one things he can tinker with in QE to make it seem like they're doing more.

At the end of the day, you have to ask whether Draghi is going to deliver something that shocks the market, and in the way that would adversely affect the euro? Right now, with inflation at 0.6% and core at 0.8% y/y, they're still a long long way from target, and more importantly, "a sustained rate of inflation". A 1pp rise per month from now would still only give them 1.0% by March, and 1.6% 6 months after that. Unless they see it stay at that level or higher for a sustained period, they'll still keep easing, and that's why I think they'll go longer on an extension. Europe is recovering ever so slowly, and probably better than it has since the crisis but it's a long way from being repaired.

Whatever they do, it's all guess work until we hear from Draghi. My views will guide my trading, if they're confirmed. I want something that sinks the euro so I can start buying it for the long-term. This ECB meeting and the FOMC are possibly the best two chances to get what might be the lowest we see the euro for quite some time, if the recovery continues. Whatever happens in EU elections or anything else won't be able to match or counter what happens when the ECB change their monetary policy stance.

That's my 10 pence worth on the subject, tell us what you expect from the ECB today? 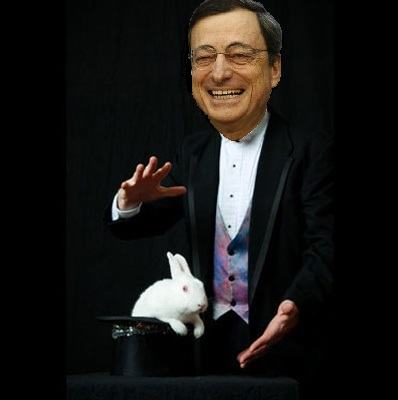 Over to the showman